BELOW THE SEA (aka: HELL’S CARGO)

Albert Rogell (“War of the Wildcats”/”The Black Cat”/”Atlantic Adventure”) directs this exciting early big-budget undersea adventure film, that features sensational special effects. It also has Ralph Bellamy in a romantic leading role, being pursued by adventurer socialite Fay Wray. Bellamy wrestles a giant octopus to save Fay in one of the key scenes at the end. It’s an entertaining film about greedy partners, after sunken gold. Jo Swerling wrote the screenplay based on his story. Despite Bellamy’s leaden performance in the romance department but good one in the action part, the pic survives.

The pic opens in 1917, in the Caribbean, during World War I, and a German U-Boat carrying 3 million dollars of gold bars is sunk in battle with an American ship. The captain, Karl Schlemmer (Frederick Vogeding), and his lieutenant are the sole survivors. When the rescue is imminent, the captain pushes the lieutenant to his death over an island mountain so he could be the only one to know where the gold is buried. 12 years later in a San Francisco port Schlemmer, taking the identity of Captain Von Boulten, gets bar owner Lily (Esther Howard) to finance his mission to recover the sunken gold and gets expert sea diver Steve McCreary (Ralph Bellamy) to bring it up from the bottom of the sea. When Schlemmer’s scheme to double-cross his American partners is uncovered during a near mutiny and the ship they’re on is wrecked on the rocks during a storm, the two men gold hunters are rescued in a lifeboat by a freighter only this time McCreary has half the map of where the U-Boat sunk. 3 years later the unholy trio unite and to go on a well-equipped scientific expedition led by research oceanographer Dr. Chapman (William J. Kelly) and financed by the wealthy aspiring oceanographer, the socialite Diana Templeton (Fay Wray). While Schlemmer again schemes to cheat McCreary out of his share, the boorish sea diver and the playful heiress fall in love. McCreary has the last laugh on his untrustworthy partners when their plan implodes due to unforeseen circumstances.

The love story was a little hard to believe, but the underwater photography is great for its time and the mostly unknown pic today was a big hit upon its release.

The Pre-Code film has a great line Wray utters to Bellamy: “I want to get into your diving suit. It’s just for one picture. That would be alright, wouldn’t it?” 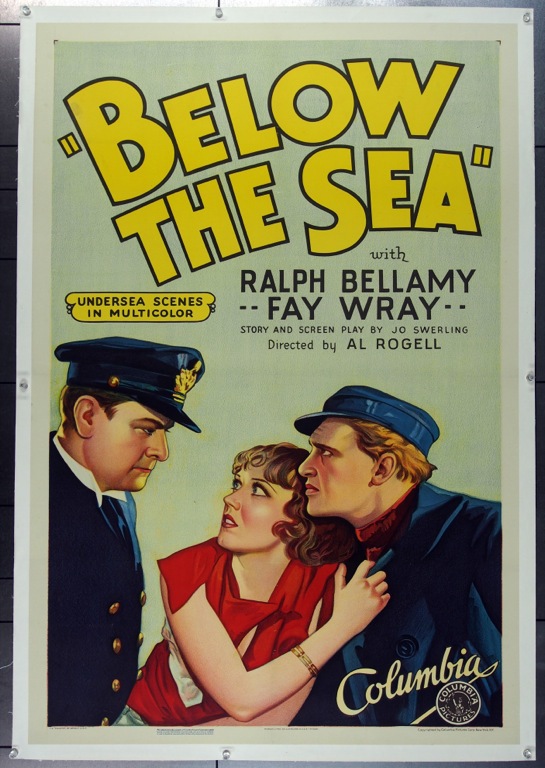 RETURN OF DRACULA, THE