BELLY OF AN ARCHITECT, THE

“Brian Dennehy comes up with a big performance…”

A potbellied, 54-year-old noted architect from Chicago, Stourley Kracklite (Brian Dennehy), and his much younger wife, Louisa (Chloe Webb), come to Rome by train, where he makes his grand entrance by having sex with her on the train just as they arrive in Italy. This will result in her pregnancy. In Rome, he will become the director of an art exhibition that is being planned on the obscure 18th-century French architect Etienne-Louis Boullee.

The couple are feted with toasts and a sugar cake replica of one of Boullee’s buildings by their hosts, the father of a family financing the exhibition and a brother and sister — Flavia (Stefania Casini) and Caspasian (Lambert Wilson). Kracklite has admired Boullee more than any other architect. He has spent the last ten years preparing for this exhibition to honor him. The Italians see this exhibit as a chance for them to gain world recognition in that field, and for that they needed a prestigious American architect like Kracklite to sell the project to their wealthy art patrons.

During the course of his stay in Rome, Kracklite will be undergoing a series of psychological and physical mishaps. His stay will be for nine months, the time it takes for Louisa to give birth and for Kracklite to end his life, as he eventually finds out that he is dying from stomach cancer. At first he will develop stomach problems and blame this on his wife, whom he thinks is trying to poison him. He will also become extremely jealous of the attention the serpentine, youthfully handsome, thin waist lined architect, Caspasian, is paying to his wife. Kracklite will eventually, after the couple is there for three months, push his wife into having an affair with Caspasian as he becomes impossible to live with, developing an obsession about his belly and his mortality. Caspasian will notice that she is pregnant before her husband does. Louisa’ husband doesn’t notice she is pregnant until she tells him, as he does not look at her stomach being that he is so preoccupied with his.

Sacha Vierny, as cinematographer, supplies the film with striking visuals. Every scene is beautiful to behold. The favorite Technicolor shades for the film are a brown resembling the marvelous architecture in Rome and the pure shades of white, which tends to introduce the characters in their best light.

Peter Greenaway (The Cook, the Thief, His Wife & Her Lover/The Pillow Book/Prospero’s Books) made use in this film of many diverse metaphorical themes: while giving us a lesson about architecture and deriding how money from patrons is what drives the arts. He lectures us about Isaac Newton, about Augustus and his wife Livia who poisoned him, about Kracklite’s stomach problems, and about how the artist is an egotist. The hero of the story is in the middle of a mid-life crisis, where it seems everything is rapidly going down the tubes for him. His feelings are wounded, his sufferings are gargantuan, and he is about to lose his wife and control of the exhibit to his architect rival Caspasian; and, eventually he will tragically lose his life. He resembles Boullee in that they are both known for producing few works and not finishing what they start, and that they were both hypochondriacs.

This film like all Greenaway productions, is splendid visually. Brian Dennehy comes up with a big performance, towering over others even in his downfall. The most emotional scene, has Dennehy looking through a keyhole and watching his wife screw Caspasian. “Belly” had one mesmerizing visual scene after another, and gave one enough fodder to think about all the spiritual and corporeal themes it just spread before your eyes without digging into them. Greenaway, as always, is an acquired taste. 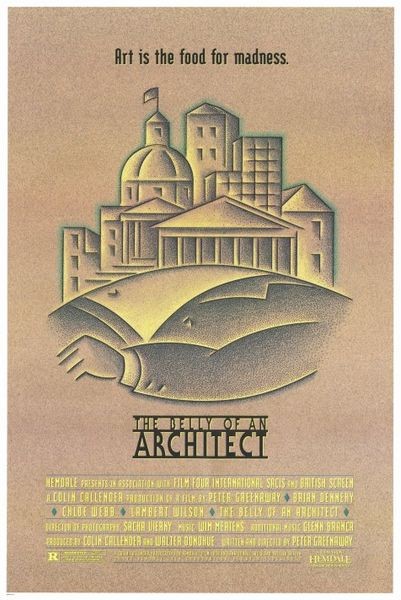 EYE FOR AN EYE

NIGHT OF THE HUNTER, THE