“The questionable narrative is not all that’s wrong with this production, as a miscast Gene Tierney is too delicate an actress to pass for a gunslinger.”

Tawdry reconstruction period Western directed by the numbers and in a stilted way by Irving Cummings (“Little Miss Broadway”/”Down Argentine Way”/”Louisiana Purchase“). Lamar Trotti’s weak screenplay includes too many offensive moments of depicting African American as stereotypesand revering the racist South for fighting the Civil War and after the war fighting the carpetbagger invasion of the South by the North to defend its honor and belief in its lost cause. It’s based on the story byCameron Rogers and Niven Busch that chronicles how an aristocratic southern lady from Missouri joined a riffraff gang of southerner guerrillas to become a notorious outlaw. But the questionable narrative is not all that’s wrong with this production, as a miscast Gene Tierney is too delicate an actress to pass for a gunslinger.

Chivalrous Confederate Captain Ed Shirley (Shepperd Strudwick) returns from the Civil War to his Missouri plantation run during the war by his headstrong sister Belle Shirley (Gene Tierney). Smug Union major Thomas Crail (Dana Andrews), Belle’s sweetheart before the war, now receives the cold shoulder from her. Crail is back in Missouri to stop the Confederate guerrillas led by Sam Starr (Randolph Scott), a captain in the Confederacy. When Crail arrests the reckless Sam Starr in Belle’s mansion and then burns down her landmark home and arrests her brother for abetting the escape of Starr, an irate Belle joins Sam’s southern gang hiding in the hills and organizes a jail break. Once free, Sam marries Belle and they become famous for their Missouri raids. When the criminal Cole brothers (Joe Sawyer & Joe Downing) join the gang, Belle has second thoughts.

Louise Beavers plays her usual Mammy role and Chill Wills his usual loyal sidekick role, this time to Scott. It tries to be a low-rent GWTW, but only manages to be low-rent hokum. 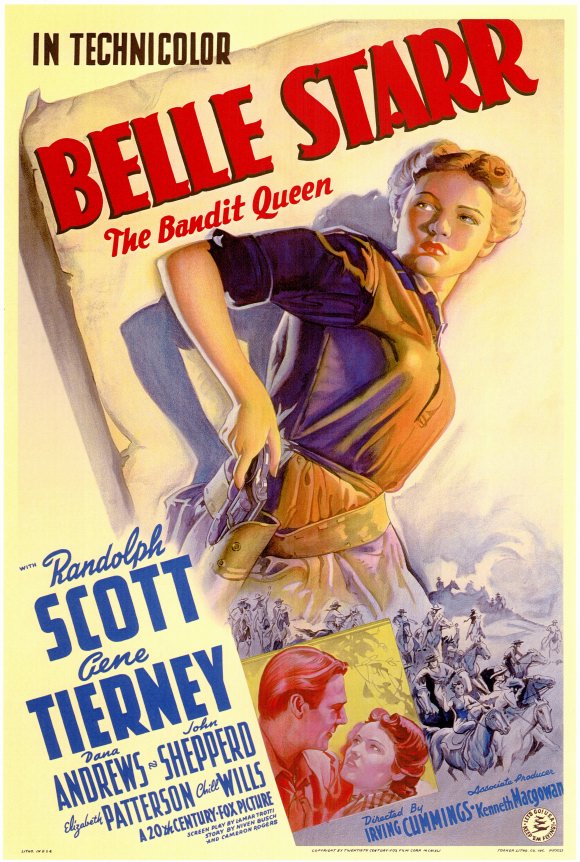