“Douglas seems to be having fun playing such a flaming swishy character and hams it up.”

Steven Soderbergh(“Che”/”Side Effects”/”Haywire”) said this would be his last film, which would be a shame for the talented filmmaker to go out on such an empty camp film. This morality tale film, which I found growing increasingly wearisome after the halfway mark as it shows the heavy drug abuse among the main players and how a stale romance can turn abusive and ugly. The biopic covers the last decade of the popular, flamboyant, sequined piano-player Liberace’s (Michael Douglas) life and his six year affair with the forty years younger twenty-year-old Scott Thorson (Matt Damon), a relationship that began in 1977 and ended with the innocent Scott, no longer innocent, abandoned by his mentally tortured mentor after he was promised to be adopted and made a heir to the estate. It’s written cleverly by Richard LaGravanese and is based on the tell-all autobiography of Scott Thorson, “Behind the Candelabra: My Life With Liberace.”

The bi-sexual Scott Thorson is an animal handler for Hollywood films and lives on the California ranch of his foster parents (Jane Morris & Garrett M. Brown). When Scott’s gay Hollwood dwelling friend Bob Black (Scott Bakula) takes him to catch Liberace’s act in Las Vegas, he’s seduced by the iconic star and his palatial home and accepts his generous job offer to become his paid companion and live with him in his palatial mansion–a home that would make King Ludwig proud.

Those that standout who were connected with the swishy star, someone who always denied his homosexuality and successfully sued his accusers, include his acerbic manager (Dan Aykroyd), his weirdo sleazy plastic surgeon (Rob Lowe), the creepy threatening homosexual houseboy (Bruce Ramsay) and the star’s heavily Polish accented elderly mom (Debbie Reynolds).

Liberace is treated respectfully in the narrative, as he offers no apologies for his hedonism (vowing to always be himself), his lavish lifestyle and his devout Catholicism. The child prodigy we learn paid his dues early on by playing in low-class saloons in the Midwest, but by the early 1950s reached celebrity status through his colorful television appearances and credits his success with viewers, mostly the blue-collar kind, because he engaged them by being the first person on TV to look right into the camera and give his uncultured fans some culture they understood. Liberace’s fans were always in denial that their campy idol was queer, and he was protective of his public image–playing at being a momma’s boy. It might have come as a shock to these gullible conservative fans when they learned their boy ‘wunder’ died of AIDS related causes in 1987.

Douglas seems to be having fun playing such a flaming swishy character and hams it up, but in his face to face scenes with Damon finds a capable foil to his folly. Underlining the glitz, the pic has a darker tone about the star’s act and brings to light in public all the dirty secrets Liberace tried to hide from them. It’s a well-produced, well-acted and well-written film, but the music played is old hat and not that delicious now that the star is probably in showbiz heaven and still singing “The Impossible Dream.” 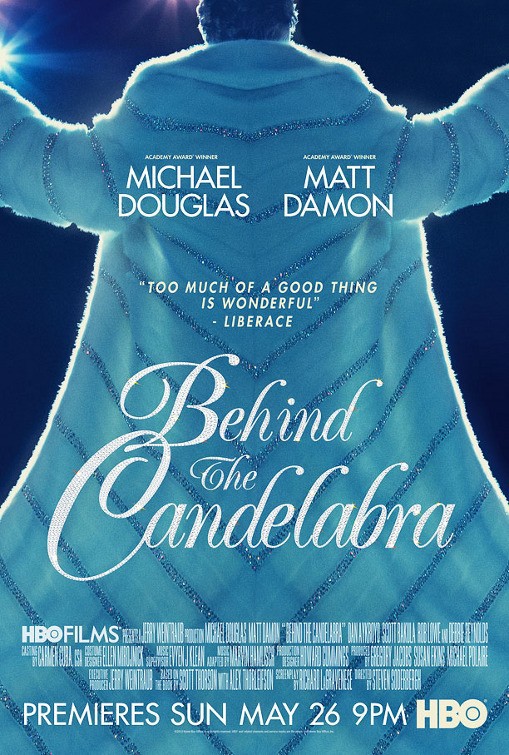