“Boris Karloff has a small part, his first speaking role in films.“

An early-talkie melodrama and an early appearance of Charlie Chan (Park), his third, in a minor role. It’s a B-film suspense story but without any mystery, clunky dialogue, awkward and over dramatic acting, and is filled with clichés. It was watchable as an old-fashioned film relic and for how enjoyable sometimes a bad film can be.

Eve Mannering (Moran) is a heiress who is seeing someone against the wishes of her benefactor uncle, Sir George Mannering (King). Her uncle has gone to a private detective to end this affair. Hilary Galt (Shaw) has investigated the ne’er-do-well Eric Durand (Strange) and has come up with a lot of dirt besides what Sir George knows about his messy affairs with other women. He’s to report that evening to Sir George, but he’s found murdered in his flat.

The murder is being investigated by Sir Frederic Bruce (Emery) of Scotland Yard, a man known to always get his man. He also gets help from Charlie Chan, a San Francisco detective, who locates a unique pair of Chinese slippers at the crime scene.

Sir George is miffed that he can’t break up the affair. Sir George favors an explorer for her, Colonel John Beetham (Baxter), who was her old flame. When Eve tells him she married Eric without asking his approval and is now off to India with him, he bids her goodbye and refuses to forgive her.

In India Eve’s miserable with her louse of a husband. He’s having an affair with the native servant Nuna, and they are doing it in their bedroom. Eve receives a letter from a nightwatchman (Rogers), as he’s been bribing Eric about the murder of Galt. The nightwatchman now complains about not receiving further hush money. Knowing that her husband is a murderer, she decides she can’t live with him anymore; but, she’s no squealer and refuses to go to the police. Instead, after being away from home for more than an year and her uncle now being deceased, she runs into Beetham in India. She persuades him to take her to the Persian desert, his next exploration site for the next four months.

Sir Frederic is hot on the trail of Beetham, because of clues linking him to the murder. But first he questions Eric in India. When Sir Frederic arrives with Eric in Persia, Eve refuses to see them and escapes in the desert. Her reason for what she’s doing just doesn’t make sense. She now knows her hubby is a monster, but she still refuses to help the police.

The story picks up in San Francisco, where Eve’s spotted by Eric working as an elevator girl. He tells her he already took care of the nightwatchman and must get the letter she received from him. When she’s forced to get him the letter, she discovers Chan got it first.

Sir Frederic and Chan set a trap for Eric at the lecture Beetham is giving about the Persian desert. Eric tries to kill Eve, but Sir Frederic steps in front of the bullet and takes it in the arm. Meanwhile Chan shoots Eric as he resists arrest and therefore no one has to know all the dirty secrets that have taken place.

Lois Moran has the dubious honor of being one of the most obnoxious and dumbest heroines ever in films. The film was loaded with lines such as: “All beautiful things must end.” “The desert gives and the desert takes away.” “Walk softly, go far.” Boris Karloff has a small part, his first speaking role in films. 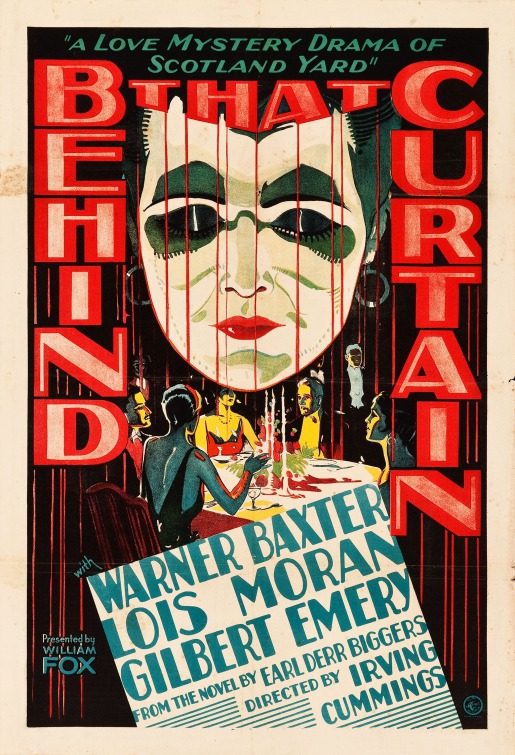