BEAST OF THE CITY, THE

English-born director Charles Brabin (“The Mask of Fu Manchu”/”The Bridge of San Luis Rey”) keeps this pre-Code crime thriller, sexy, fast-paced and action-packed. It’s based on an unpublished story by W. R. Burnett and written by John Lee Mahin. The over melodramatic film noir has a high body count and is too preachy regarding civic responsibility, but it’s always lively and Walter Huston and Jean Harlow make the screen sizzle. MGM copied a Warner’s gangster styled film, and set it in Chicago. The studio suits were not satisfied with this above average crime thriller and let it die in release, holding up its distribution for years and then keeping it only in second-tier movie houses.

President Herbert Hoover introduces it in a written quote that the film is dedicated as a glorification to the honest policemen instead of the criminal.

Hardnosed Police Captain Jim Fitzpatrick investigates the gangland slaying of four mobsters and tries unsuccessfully to pin it on crime kingpin Sam Belmonte (Jean Hersholt). The politically minded Chief of Police Burton (Emmett Corrigan) is scared off by Jim’s roughhouse tactics and transfers him to a uniformed captain’s job at a quiet suburban precinct, which upsets the gung-ho lawman who wants action. But Jim catches a pair of bank robbers and is back in the newspaper headlines as a public hero. The city is disheartened by the mounting crime rate due to organized crime and the reform groups put the pressure on the mayor to appoint Jim as their crusading chief of police. He immediately cracks down on the speakeasies and corruption, using tough semi-legal methods. Meanwhile Jim’s useless vice squad detective brother Ed (Wallace Ford) sulks because Jim won’t promote him to lieutenant and complains he doesn’t have enough dough even though the bachelor lives for free at his brother’s house. Soon he falls for Belmonte’s loose woman, wisecracking, gun moll Daisy (Jean Harlow), and through his inside information sets up a bank robbery with the gang in which he gets a cut. But his protective brother sent two of his trusted cop friends to watch over him and one of them gets killed in the robbery. When Jim finds out his own brother is involved, he brings him up on murder charges along with the two goons who committed the robbery and murder. Belmonte gets the trio a sleazy shyster mouthpiece (Tully Marshall), who astonishingly talks the gullible jury into believing his clients are innocent. Jim is angered that the judicial system doesn’t work, and when his humiliated spineless brother pleads with him to give him one more chance Jim concocts a suicidal mission involving Ed telling the crime boss he’s ratting him out to the newspapers. Jim and fifteen of his close police buddies then raid Celli’s restaurant where Belmonte and his gang are celebrating the verdict and a shootout results in everyone getting killed. The point of the film noir being that even though Jim is a loving family man and a good cop, his obsessive moral righteousness is ultimately proven to be just as destructive and suicidal as the criminal’s venality, greed and hunger for power. 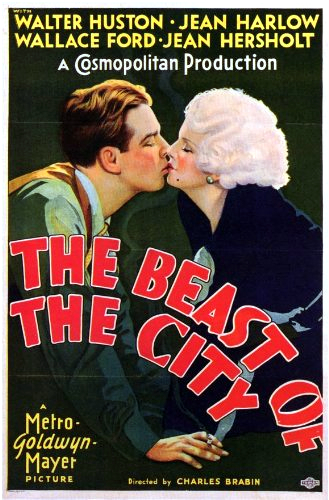