“The Bat Whispers is a talkie remake of Roland West’s silent 1926 version.”

The Bat Whispers is a talkie remake of Roland West’s silent 1926 version. It was adapted from a hit Broadway play of Mary Roberts Rinehart and Avery Hopwood. This version was successfully restored by UCLA Film and Television Archive into its original wide-screen format. It’s a creaky whodunit flooded with clichés from the spooky “Old Haunted House” genre of films. There will be ghosts, secret passages, scary unseen voices, sliding doors, crawling hands, thunder and lightning, and many other standard fright tactics used. The B-film tells a chaotic story that is incomprehensible to follow; but, it is visually interesting due to the mobile camera on dollies and aerial tracking shots inside the dark mansion and the overhead shot of The Bat, dressed in a black cape, climbing up a skyscraper in the shadows of the night. It’s not a good film, but more one that is valued for its historic importance to films (it was probably the inspiration for Bob Kane to create Batman).

The Bat taunts the New York City police by sending them a note that he will enter the safe of the Bell house between 11 and 12 p.m. and rob it of the valuable Rossmore necklace. Even with police guarding the house, the Bat succeeds. He then retires to the country.

Wealthy socialite spinster Cornelia Van Gorder (Grayce Hampton) is leasing the Courtleigh Fleming country estate. Fleming’s bank was just robbed of $500,000 while he’s supposedly on holiday in Europe. Cornelia’s kept company by her attractive niece Dale (Una Merkel), who gets her boyfriend Brooks (Bakewell) hired as a gardener. He’s really the bank teller who disappeared and is suspected of committing the robbery, but Dale brings him here under false pretenses because he overheard Mr. Fleming speak with an architect about a secret room and they suspect that’s where the missing money is. Also living in the house are the creepy caretaker (Charters) that Fleming insisted remain. Cornelia brings along her loyal maid Lizzie (Eburne), who screams throughout the film from fright and provides some comedy amidst all the characters running around the haunted house looking for both The Bat and the missing money.

Cornelia receives a threatening note with a rock thrown through the window, which tells her she better leave the house. The tough-minded Cornelia is warned by a visiting Dr. Venrees (von Seyffertitz), who has a villainous German accent, to leave the house. Instead she hires a private eye (Clark). Into the picture comes Detective Anderson (Chester Morris), who tries to figure out where the hidden room is from a piece of blueprint paper that has been torn off showing the secret room. He is in the habit of staring with his eyes wide open and then rolling them in a maniacal gesture. Richard Fleming, the bank president and the son of the bank owner, shows up when Dale tells him the money is in the secret room. The Bat also shows up and a dead body is produced. There’s also a stranger who looks as if were mugged. The question becomes which one is The Bat.

Films similar to this one, The Unholy Three (1925), The Bells (1926), The Bat (1926), The Cat and the Canary (1927), The Unknown Terror (1927) and The Terror (1928), were adapted from stage plays and were very popular during that era of cross-over films from the silents to the talkies. This film, though outdated, is still a good representative of that type of stagy film. 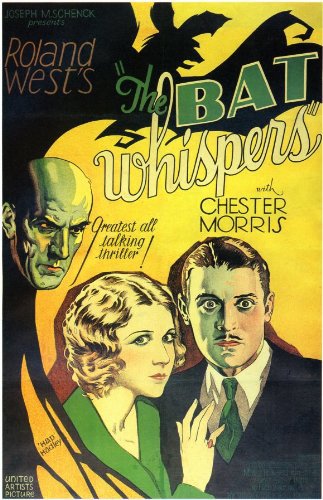