Lee Philips (“Louis Armstrong: Chicago Style”/”Mae West”) is a long-time TV director. His made-for-television biopic on the 19th-century American showman Phineas Taylor Barnum (born 1810 and died in 1891) is a straight-forward pic that chronicles the flamboyant showman’s success story starting from early childhood as a poor shopkeeper in Bethel, Connecticut, to his becoming a millionaire circus owner. The 72-year-old former circus trapeze artist Burt Lancaster delightfully plays the title role. It’s based on the story by Michael Norell & Andy Siegel. The aim here is to tell the straight story of showman extraordinaire, P. T. Barnum, and dispel some myths that have become part of his legacy, such as the showman never saying “There’s a sucker born every minute.” His rebuttal to critics was often “I am a showman by profession…and all the gilding shall make nothing else of me.”

It opens in 1883 and the 70-year-old Barnum is attending the opening of Barnum & Bailey’s “Greatest Show on Earth” and pauses to tell his colorful life story, as there’s a flashback to when he was a teenage shopkeeper and used deception to make a sale and got involved with the lottery mania sweeping the country to hustle worthless green bottles he got in a swap. At 19 he married Charity Hallett (Laura Press), his companion for the next 50 years. In 1835 the 25-year-old Barnum began as a showman with his purchase and exhibition of a blind and almost completely paralyzed black slave woman, Joyce Heth, claimed by Barnum to have been the nurse of George Washington, and to be over 160. This proved to be untrue, because when she died her age was established as only being 80. Undeterred by his critics, Barnum began his first variety troupe called “Barnum’s Grand Scientific and Musical Theater”and when broke in 1841 still managed to work out a deal to buy Scudder’s American Museum, at Broadway and Ann Street, New York City. He renamed it “Barnum’s American Museum” with the addition of exhibits and improvements in the building, and it became a popular and money making showplace. Barnum exhibited a midget called Charles Stratton and had him act as “General Tom Thumb” (“the Smallest Person that ever Walked Alone”). Tom was then four years of age but was passed off as 11. The boy was taught to imitate people from Hercules to Napoleon and by five was drinking wine and by seven smoking cigars for the paying public. Though exploited, Tom Thumb maintained a good relationship with Barnum and was free of bitterness. The showman became a very wealthy man after bringing his Tom Thumb act to Europe, and entertaining Queen Victoria of England. In 1850 Barnum engaged Jenny Lind (Hanna Schygulla), “the “Swedish Nightingale,” to sing in America for the first time at $1,000 a night for 150 nights, and his gamble paid off as he recouped his investment four times. After a flurry of other hustling enterprises such as exhibiting various freak acts in his ‘Barnum’s American Museum,’ he got into the circus business when he was 61, in Wisconsin, in 1871, with William Cameron Coup. The partners established “P. T. Barnum’s Grand Traveling Museum, Menagerie, Caravan & Hippodrome”, a traveling circus, menagerie and museum of “freaks.” By 1872 he was billing it as “The Greatest Show on Earth.” Barnum eventually merged with James Bailey and their innovated traveling circus by rail was a success. The partners split up for the second time in 1885 but reunited in 1888.

For a made-for-television movie, it has some fairly good production sets but lacks dramatic firepower. But for those who just want to know a little something about Barnum, the undemanding pic should satisfy. 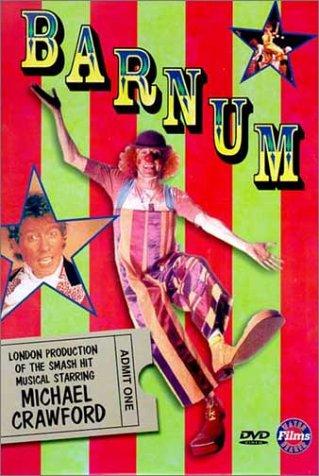