BARKLEYS OF BROADWAY, THE

“It doesn’t help that the music by Harry Warren and Ira Gershwin is slight.”

It was planned by MGM as an Astaire-Garland follow-up to Easter Parade, but Judy dropped out over ill health or psychological problems, and this paved the way for one last Fred ‘n’ Ginger movie–their only film in Technicolor. It comes ten years after their last appearance together in The Story of Vernon and Irene Castle (1939). Charles Walters (“Easter Parade”/”The Belle of New York”) directs in a flat way and Betty Comden & Adolph Green turn in a bland script. The popular dance couple do five classy dance numbers together (that include the opening “Swing Trot” and the jazzy one called “Bouncing the Blues”) and there’s an engaging sixth solo dance by Fred (“Shoes with Wings On”). The film’s less than spectacular musical numbers include “My One and Only Highland Fling,” “You’d Be Hard to Replace,” and Oscar Levant’s keyboard rendition of “The Sabre Dance.”

The lightcomedy routine plot has the famous husband-wife musical comedy team of the Broadway musical stage, Josh and Dinah Barkley (Fred Astaire and Ginger Rogers), always argumentative off the stage and teetering on splitsville. Their usual discord, done in a civilized manner, picks up in intensity when Dinah gets a strong dramatic urge. The producer (Clinton Sundberg) is worried about Dinah’s commitment to the act and introduces an understudy Shirlene May (Gale Robbins), a hottie chorus girl, into their show. Dinah gets insecure, and at the same time becomes vulnerable to the flattery of French theatrical ‘genius’ director Jacques Barredout (Jacques Francois) who begs her to try serious drama and play the lead in his new play based on the life of the young Sarah Bernhardt. All the tension causes the Barkleys to split, as the Svengali-like Josh is left on his own and becomes depressed. Also around for comic relief and moral support is the couple’s wisecracking composer and pianist friend, Ezra Millar (Oscar Levant).

It doesn’t help that the music by Harry Warren and Ira Gershwin is slight, but it has its fun moments:Fred being playful with his solo dance of ‘Shoes with Wings On’ and a happy ending as the couple gets back together for the finale and reprise the Gershwin ballad ‘They Can’t Take That Away from Me’ (originally performed by Fred and Ginger in Shall We Dance?). 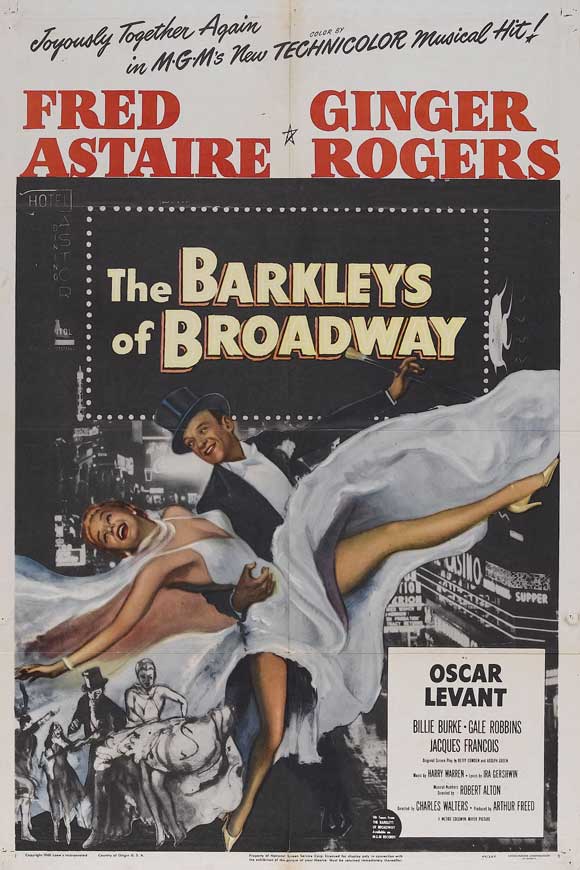