A pleasing but formulaic cable TV sitcom type of film about Calvin (Ice Cube), a third generation barber who reluctantly inherits his father’s popular neighborhood barbershop first opened in 1958 by his grandfather on Chicago’s South Side. Because he can’t pay his property taxes, the bank is about to foreclose.

The film was a mixture of clichéd moments, banal dialogue, stereotyped characters, sentimental poppycock, but it also had moments of quiet streetwise wisdom–enough to keep the flick afloat from all its cornball shticks. Ice Cube holds the film together with an engaging and warm performance, while a host of character actors do their comedy bits around many amusing vaudeville-like skits, and whenever there might have been a lull in the action the noisy barbershop banter and bickering keeps things hopping.

The most hilarious scene was a Laurel and Hardy routine between two bungling thieves, the overweight know-it-all JD (Anderson) and the slender dimwit Billy (Tate). They stole an ATM machine from a convenience store on the same block as the barbershop and are trying unsuccessfully to break it open as they move it around the neighborhood while the police are searching for the thieves.

The film’s best scene was the one that caused a controversy among some black leaders such as the Reverend Al Sharpton and Jesse Jackson, who foolishly called for a boycott of the movie. They were upset because the old-time barber with much idle time to jaw away because he doesn’t seem to draw any customers, the motormouth Eddie (Cedric the Entertainer), has spoken irreverently of African-American history and says Rosa Parks’ action to desegregate a southern bus was overrated in the ‘Civil Rights movement.’ The other barbers and patrons, by the way, disagree with Eddie’s take on this issue (not that it matters!).

Barbershop’s most integrating moment is watching a friendly white barber (Garity, the son of Jane Fonda and Tom Hayden), who is immersed in black culture and just wants the opportunity to cut hair, try to make it in the black barbershop as he defends himself for acting black by saying that’s who he really is.

The film takes place over one long and trying Saturday, as Calvin’s pregnant and devoted wife Jennifer (Lewis) kisses him early in the morning before he leaves for work and tells him she loves him for keeping his father’s barbershop alive. But Calvin has other ideas as he wishes to open his own recording studio in the basement of his house, as he’s disappointed that his father let the place become unprofitable by giving away too many free haircuts. Calvin opens his shop early as he views the scene of his neighbor’s smashed storefront, where he tells the hurting Indian owner (Cheena) of the stolen ATM machine “to be strong.” Soon the barbers and regular customers start trickling in. Most of the film is set in the barbershop. Calvin is soon busy trying to cool things down between his sparring barbers, the sexy and vocal Terry (Eve, hip-hop singer) and the snobbish, bourgeoisie, college student Jimmy James (Thomas), whom she accuses of drinking her apple juice drink. This comes after she finds her smooth boyfriend (George) with another woman in bed. Calvin is on the phone to a local loan shark, Lester Wallace, who is dressed like a well-heeled pimp and is driving a snazzy Lincoln Continental. Calvin makes an unholy deal with him to sell the shop for $20,000 and for him to pay off his debts, but changes his mind when he learns Lester will turn the place into a strip club. But when Calvin tries unsuccessfully to return the dough to Lester, he’s told that he can have the place back only if he pays him $40,000 by 7 p.m. that night. Calvin holds the secret of the sale until his wife barges in on him when the nosy next door shopkeeper phones to tell her Lester was in the barbershop. Calvin is sorry he broke his wife’s heart and let down the community, and is further remorseful of what he did when he talks with Eddie as he tells him he messed up big time. The old-timer reflects on how the barbershop is the black man’s country club and the neighborhood meeting place where the black man can speak his mind and tell it straight. Calvin also feels he will now let down those who need his help such as Ricky (Ealy), a two-time felon he took a chance on hiring and who is trying hard to go straight (But if he was trying that hard, I wonder why he brought a hand gun to work!).

Barbershop plays as an old-fashioned, uplifting and somewhat sermonizing film about black pride and tolerance for others, as its main point is that blacks can and should run their own businesses and should not rely solely on others to help them. While the movie’s politics might be less than liberal, its call for community spirit and solidarity reaches across all political viewpoints. The movie’s comedy is also of the non-threatening PG-13 kind, and if it’s marketed right should reach a solid crossover audience. Music-video veteran Tim Story directed a script by Mark Brown which is likable enough, but is more suited for those who like sensible films that do not rock the boat too much. 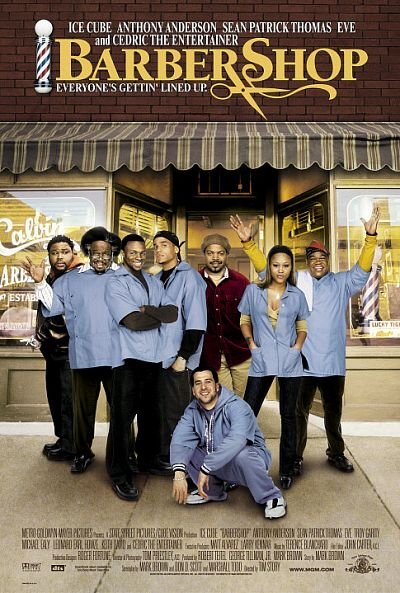