“If you like car chases, you might want to check out this film for its three high-speed chases; that is, if they weren’t so unexciting.”

A lackluster and absurd action film written/directed/produced by John G. Thomas(“Tin Man”/”Arizona Heat”/”Hamal 18”), that’s based on real events that took place in Las Vegas. It was shot on location at California City, California.

Billy Baxter (Dean Stockwell) patrols the California highways on the route to Las Vegas, fanatically looking for speeders. He obsesses to find the hit-and-run driver in a black Porsche who killed his brother and sister-in-law. Billy gets fired when he shows he’s too zealous to nab speeders and goes on a speedy joyride to make a point that the highway patrol cars are too slow to catch today’s speeders. Since he’s in debt and his wife’s divorce settlement to take his home is being finalized, he accepts when approached by a DEA agent to work for them undercover to catch cocaine smugglers. They are a ring of hit-and-run drivers who stage illegal dangerous races in the desert and are known as the Banzai Runners. Partnering with his nephew, the son of his dead brother, Beck Baxter (John Shepherd), they infiltrate where the mostly spoiled rich boys hang out to race their custom-made expensive sports cars for thrills. Billy is soon led to a drug dealer named Syszek (Billy Drago), who used to own the black Porsche that killed his brother.

If you like car chases, you might want to check out this film for its three high-speed chases; that is, if they weren’t so unexciting. 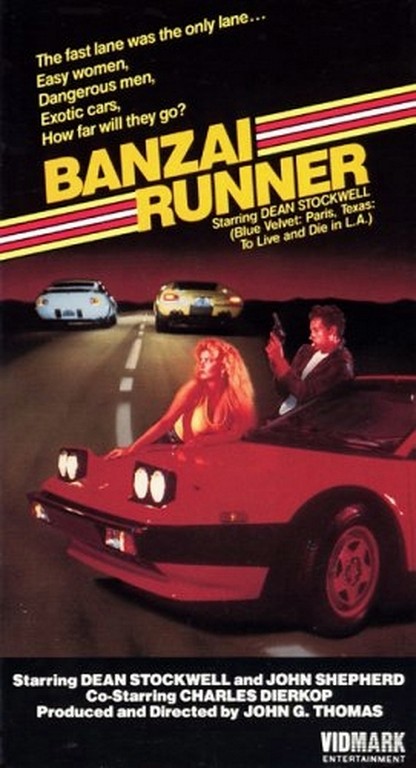