BANSHEES OF INISHERIN, THE

Martin McDonagh (“In Bruges”/”Three Billboards Outside Ebbing, Missouri”) is the Oscar-winning Englishman writer-director of this brilliant dark comedy that’s an offbeat study on friendship and isolation.

Its star, Colm (Brendan Gleeson), is a fiddle player who lives on the scenic but windy remote island off the coast of Ireland, Inisherin (a fictional place), who without cause one day tells his life-long carefree and talkative best friend Pádraic (Colin Farrell), a dairy farmer, he no longer wants to speak to him for no apparent reason except he no longer likes him because he finds him to be a dullard (why he does so now will be explained later on in the film).

To convince his pal he means business, Colm promises to cut off one of his own fingers every time he says something to him. This happens in 1923 at the time of the Irish Civil War that’s taking place on the mainland.

The strange but funny film, built around this simple sit-com plot, never ceases to be anything but a delight.

The retirement aged Colm is a whack job fiddler, Mozart lover and a dreamer, hoping to one day compose a song for the ages. On the other hand, Pádraic is a gullible guy, who roams around the country fields with his pet donkey walking near him.

Pádraic’s smart sister Siobhan (Kerry Condon), a book lover, nags her brother about turning their house into a barn with his pet donkey and mentions she intends to leave the island because all the eligible to marry men are bores. The one most interested in her is the mental midget Dominic (Barry Keoghan), the son of the local cop (Gary Lydon).

The tale is filled with laughable absurdities-like a priest (David Pearse) with no idea on how to relieve Colm of his depression when he goes to confession. It’s a story that takes the meaning of friendship to way out extremes.

Please note this shamrock fairy-tale seems to indicate even if the smallest insults are not taken care of, there’s the possibility they will grow into bigger problems. We’re reminded of this by hearing at times the gunfire from the on-going civil war in the mainland cut through the island’s beautiful landscape.

If you’re wondering about the banshees in the title, the banshees are the wailing female spirits in Irish folklore who appear in a family death. The filmmaker wonders if they are present here and surmises they must be amused at what they are seeing. 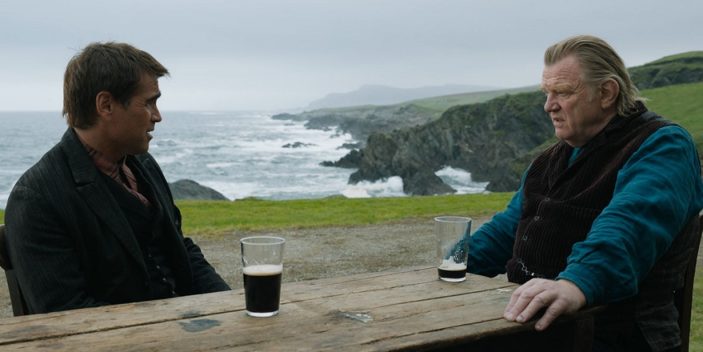 DEATH OF STALIN, THE