“Lee, in his least commercial film, shoots for controversy but loses focus.”

The title is lifted from a Malcolm X quote from a clip from Spike Lee’s own biopic: “You’ve been hoodwinked. You’ve been had. You’ve been took. You’ve been led astray, led amok. You’ve been bamboozled.” Writer-director Spike Lee’s (“She’s Gotta Have it”/”Crooklyn”/”Summer of Sam”) ambitious preachy satire on American network television pays homage to Network and A Face in the Crowd, but flubs when its politically incorrect racism theme turns out to be neither funny nor relevant. It instead offers a polemical lecture to paint the white media with broad brush strokes for their anti-black programming decisions and chastises black executives for going along with this subtle and not too subtle racism in green-lighting weak black sitcoms. Lee wishes to take on media programs that perpetuate the insulting stereotypes that go back to the days of the 1940s when Mantan Moreland was the wide-eyed and scared black manservant in those Charlie Chan films, but ironically only hits paydirt when it reveals its own stereotype casting in the climax with a powerful minstrel show dance sequence among corked-up black faces with painted on fire-engine red lips and a chorus line of “coons, mammies, and pickaninnies.”

Harvard-educated Pierre Delacroix (Damon Wayans) is a bright but frustrated African-American network TV writer for CNS, the only Negro on the team, who is out of touch with black popular culture and speaks with an affected sophisticated Caucasian accent. He’s told by his boss, the crude white executive Dunwitty (Michael Rapaport), someone so delusional that he thinks he’s a white homeboy who can put his finger on the black pulse and freely use the N-word, that the network’s ratings are at low point and he wants Pierre to dig deep into his soul experience to put together a popular show with African-Americans to reach a wide audience and give them some ratings. Pierre feels insulted that his blackness is being exploited and thereby comes up with a concept that is so crass and over-the-top that he can’t believe anyone would buy into it (think Mel Brooks’ Producers!), and hopes he gets fired so the network pays off his fat contract. He recruits homeless young African-Americans Manray (Savion Glover), a tap-dancing street artist, and his partner, Womack (Tommy Davidson), to become “two coons” playing a modern-day blackface act in an edgy minstrel show called “The New Millennium Minstrel Show.” Their names are changed to Mantan and Sleep ‘n’ Eat, and a bunch of other second-rate black acts are recruited to fill out the variety show.

The shock to Pierre and his earnest black assistant Sloan (Jada Pinkett-Smith) is that the white network bosses accept it as a pilot series even though it’s set in a watermelon patch on an Alabama plantation and it’s filled with extreme racist cliches. It becomes a big hit, as it’s unexpectedly embraced by the press and the public as good television that is timely, hip and funny.

The problem that lingers is that the satire itself is as bad as the TV programs it rails against, which makes for an annoying watch. It’s a poorly executed film that lazily offers only simplistic answers to complex questions, as it’s set against the shallow background of the television industry. Lee, in his least commercial film, shoots for controversy but loses focus, and the provocateur leaves a bad taste in one’s mouth in a misfire that might have been better served if it was a documentary. 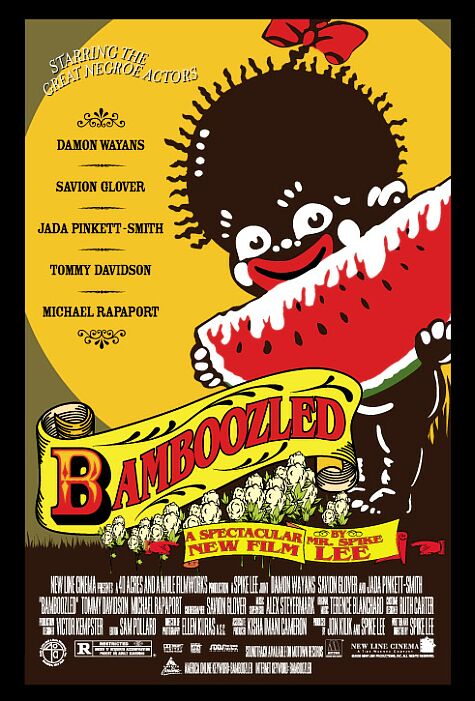