“Lets even those who hardly know the difference between a tu-tu and a pirouette in on the inner secrets of the illustrious ballet company.”

Writer-directors Dayna Goldfine and Dan Geller present a glorious but sentimental history of the Ballets Russes from its Paris beginnings in 1909 under the leadership of the great impresario Diaghilev. It was a place for Russian refugees to dance ballet (they never performed in their native Russia); it relocated in the later years to Monte Carlo. After the death of Diaghilev in 1929 it came in 1931 under the management team of Rene Blum (Parisian art director) and Colonel Wassily de Basil (former Russian officer) and was renamed the Ballet Russes de Monte Carlo. It evolved through the strength of its first choreographer George Balanchine, who featured young girls as stars (Irina Baronova, Tamara Tchinerova, and Tatiana Riabouchinska, in which he created new works for his ‘baby ballerinas’). Balanchine’s successor was the great dancer Leonid Massine (formerly Diaghilev’s lover after his breakup with Nijinsky). After initial success Blum dropped out and left the company in the sole hands of his difficult to work with partner (Blum was imprisoned at the Auschwitz concentration camp and murdered by the Nazis in 1942). Soon a rift between the rigid authoritarian de Basil and the artistic Massine caused the company to split in 1938, with those sticking with de Basil taking the name as the Original Ballet Russes and Massine’s company was called the Ballet Russes de Monte Carlo. After showing the ongoing battle between the rival impresarios, the film takes us to its demise in 1962 in a final Brooklyn show under the bankrupt leadership of the cost-cutting Sergei Denham. The company became more Americanized and even had the American Agnes De Mille act as choreographer for awhile.

It artfully shows how the company, despite its rocky road, became the most influential ballet company in the 20th century. Its history might as well be the history of modern ballet for the Western world, and this film as narrated by Marian Seldes lets even those who hardly know the difference between a tu-tu and a pirouette in on the inner secrets of the illustrious ballet company (it spills the beans with a lot of gossip, but never gets too catty or, for that matter, too problematic). The documentary does its thing through use of rare archival footage, interviews with the personalities who are now in their 70s, 80 and 90s, and by having these articulate and outgoing dancers relate their work experiences, informally reminisce on relationships and tell in their own words what it was like being a part of the noted ballet company. The film distinguishes itself because the participants are all pleasant, their story is worth hearing and the archival footage might be blurry but nevertheless is priceless. All those interviewed are still working in the field they love, even though they’re up there in age. The passion they have for dance comes through, as most are working as teachers in various parts of the world and we see them in action both as youthful performers and now as elderly ambassadors for classical dance. Just for the record those interviewed include: Yvonne Chouteau (first Native American), Frederic Franklin (English dancer), Nathalie Krassovska, Marc Platt (American dancer), Mia Slavenska, Nini Theilade, George Zoritch, Maria Tallchief, Nina Novak (Denham’s love interest and less talented dancer who was given undeserved leading roles), Alan Howard, Wakefield Poole (went on present gay porno dance), Raven Wilkinson (first African-American), Tatiana Stepanova, the three baby ballerinas, Yvonne Craig (later of Batwoman fame) and Miguel Terekhov. Most hadn’t seen each other for some 40 years until their filmed reunion in New Orleans in 2000. 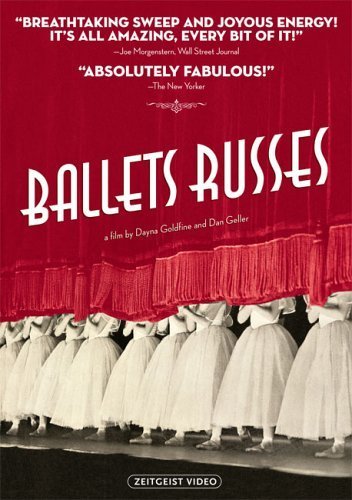