BALLAD OF RAMBLIN’ JACK, THE

“The film captures the spirit of Jack…”

This wonderful documentary on the life of Ramblin’ Jack Elliott won the Special Jury Award for Artistic Achievement at the 2000 Sundance Film Festival. It is filmed by the 30ish Aiyanna Elliott, daughter of Elliott’s by his fourth wife, as she tries to connect with her errant father. He’s a father she never really knew and rarely ever saw. The film’s other aim is a loving tribute to his musical accomplishments and his troubadour lifestyle of never settling down. His importance to the music world is noted as the link between Woody Guthrie and Bob Dylan. He was Guthrie’s hand-picked protégé, learned from the master first-hand, having lived with him in Brooklyn and was at his bedside during his illness. Jack sang Woody’s songs in the Greenwich Village folk revival in 1961. Jack’s country nasal style of singing was imitated by Dylan who later on ignored Jack when he became famous (this upset Jack’s friends more than it did him, until he was snubbed at the tribute for Woody where Dylan was the headliner).

The film is enriched by extensive use of archival footage from as far back as the 1930s, the film traces Jack’s restless childhood in a middle-class Jewish family. He was born in NYC in 1931 with the name Elliot Adnopoz. His father was a medical doctor and expected Jack to follow suit. His mother Flossie was an elementary school teacher and was according to her elderly sister an overbearing person and not very likable, who expected her son to live a conventional life. But this was not to be, at age 15 Jack ran away from his private house in NYC and joined the rodeo. There he learned how to be a cowboy and play the guitar. His life’s passion was to be a singing cowboy, and though he returned to NYC (a place he hated) to finish high school — he nevertheless was able to transform himself into a cowboy. Aware that legendary folk singer Woody Guthrie was living in the Coney Island section of Brooklyn, he gave him a call one day and got invited to stay with him. He learned Woody’s songs, lived the ramblin’ trip instead of just talking about it, and made himself into a folk singing legend. But he never attained mainstream popularity, prevented from doing so by his irresponsible and ramblin’ ways. His highmark in popularity came in 1969 when he appeared with Johnny Cash in Nashville. During the 1970s he went into the tank, hurt by his use of drugs. But he reemerged in the 1990s and continued traveling and playing the guitar. In 1995 he hit it big-time with a traditional folk album that won him national recognition at last, as he won a Grammy. In 1998, President Clinton honored him by presenting him with the National Medal of the Arts prize.

In 1955 Jack left his road travels in the States and spent 6 years playing in London and touring Europe; he married the first of his wives, June Shelley; but, because he lived life from moment to moment in a disorganized fashion June would divorce him to live in a kibbutz in Israel. Jack would return from London as a legend in 1961 to play to packed crowds in Greenwich Village for the new folk music’s trendy spot, Gerde’s Folk City. There he dressed cowboy style in a Stetson and boots and jeans, looking out at the crowd through wire-rimmed glasses, picking and yodeling his “traditional folk music.” Jack’s a jokester loving what he was doing with a passion as he sang in a high reedy voice. By living his life the way he wanted to and never being a planner or ambitious, Jack caught the idiom of authentic American folk songs like few others have. As folk singer Dave Van Ronk perceptively says, it’s the music world’s gain he lived such a reckless life — that if he settled down and became a family man he might have been happier but he wouldn’t have been Ramblin’ Jack Eliott.

The film captures the spirit of Jack. It has the cozy look of a home-movie. The filmmaker, meanwhile, still does not know her father. When Jack takes his daughter on a drive in Mendocino to visit “the house where he says we came closest to being a family” and he still can’t find the house, it is then that Aiyanna realizes how ill prepared her father was to be a family man. She says out of frustration, she can’t keep him focused long enough to talk about what she wants to know. Aiyanna complains: “The thing is, I can’t remember having an actual conversation with my dad.” Arlo Guthrie (Woody’s son) tells her, not to sweat it, that she never will know her father. He should know, he was in the same situation. 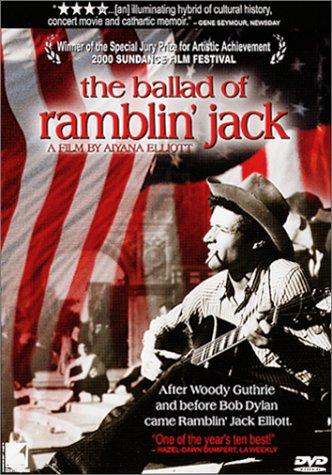