The pacifist war drama of WWII by writer-director Grigori Chukhrai (Chistoye Nebo) was the first Russian film to be a success in America during the Cold War era. It won a Special Jury Prize at Cannes in 1960 and best film at the San Francisco Film Festival. It’s a lyrical humanistic black and white film that’s simply told and its universal anti-war message is easily understood. It is told through the eyes of a pleasant, honest and decent 19-year-old soldier who is killed on the front after being decorated as a hero. It’s noted for its detailed depictions of everyday Russian life. The filmmaker comes from the conservative wing of Russian filmmakers and offers a fine example of stylistic craftsmanship and manages to keep its tear-jerker melodramatics in check.

Pvt. Alyosha Skvortsov (Vladimir Ivashov) is a signalman in the front, who though scared in his foxhole destroys two Nazi tanks. As a reward receives a decoration and the general (Nikolai Kryuchkov) gives him a four-day pass, in which he plans to go home by railroad to his rural village and fix his mother’s leaky roof. On the way he gets distracted by meeting several people who need the warm-hearted soldier’s help. A crippled soldier (Yevgeni Urbansky) doesn’t want his pretty young wife to see him like this and plans on leaving the marriage until Alyosha talks him into meeting her at the station. Alyosha then stops off to deliver valuable cakes of soap from a fellow soldier to his wife, but learns she’s with another man. On the military train Alyosha meets an untrusting attractive homeless city girl Shura (Zhanna Prokhorenko), who hitched a ride on the freight car. After a clumsy start they begin a tender romance, but after a few hours riding together and falling in love they get separated at a railroad yard switching and never see each other again. When the soldier gets home eventually after going on by truck and on foot, he only has a few moments to share with his loving mom (Antonina Maksimova) before returning to the front.

Its emotional cry of pain is best seen from the mother who still waits by the road for her son to return from a war that ended two years ago, though knowing he was killed in action and won’t ever return. Her loss provides the ammunition to fire away at the destructiveness, uselessness and hopelessness of war for both the victors and losers. 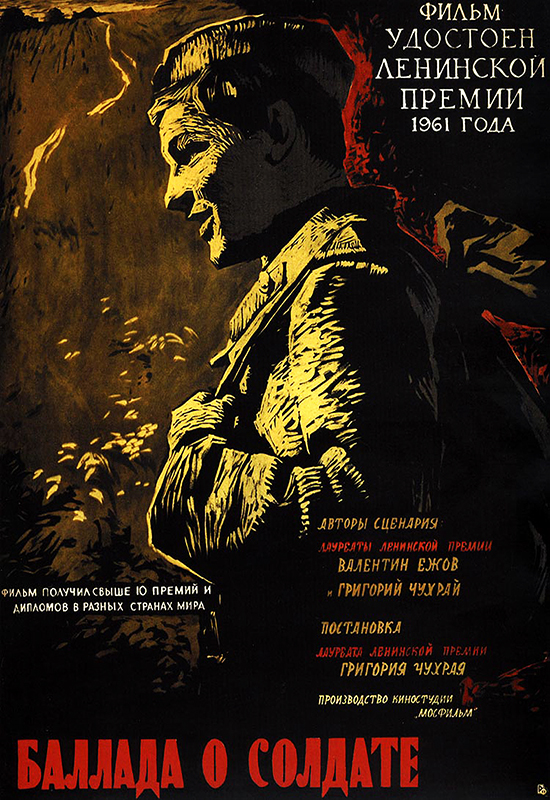