“The only truth about this film was the sleaze.”

“Bad Lieutenant” is a creepy Catholic guilt-trip flick. It’s lurid, pretentious and not credible. The only truth about this film was the sleaze. Harvey Keitel is the unnamed bad cop, bad person, and bad husband. He’s a substance abuser, a compulsive gambler, a man possessed by demons, a power abuser, and a depraved person who has lost his humanity. Keitel is getting further out-of-control and going from bad to worse because of his drug and gambling problems. One has to wonder how he became a lieutenant and when did his decline start. The film gives Keitel the opportunity to go to the bone and pour his acting heart out, as his performance is stewing with both courage and honesty. But I’m afraid he’s up against a script that is covered with muck, which reduces his masterful performance to being merely an academic exercise.

There was no reason to identify with the corrupt Keitel and his eventually unbelievable and unsavory way of seeking redemption. Abel Ferrara (Ms. 45/ King of New York) directs and co-wrote it with Zoë Lund.

To sully religious matters even further, none other than Jesus makes a live appearance to communicate with the strung-out and hallucinating druggie cop and offer consolation. That might have been the last revolting straw for me, in an exploitative and manipulative film that lives to shock. A NYC in deep turmoil looks as if it were a haven for killers, rapists, muggers, junkies, naive nuns and bad cops.

Keitel makes his daily cop rounds in the last week of his regrettable life. His loveless marriage is kept as one of convenience, which probably continues only because the couple has given up hope that change is possible and maybe because of his wife’s Catholic beliefs about divorce. Keitel doesn’t communicate with his wife and his three children, but uses home as a place to watch sports on TV. He’s impatient and hostile towards his two school-age sons, as he drives them from their comfortable middle-class Queens private house to school after they missed the school bus. At work, he arrives at a crime scene after getting high on crack. Two young women were brutally shot dead in the head while sitting in their car, but all the numb Keitel was concerned about at the crime scene was getting his fellow officers to bet on the Mets-Dodgers playoff games. It’s a series where the Dodgers are up three games to none. He talks his colleagues into betting on the Mets, even though he intends to bet their dough on the Dodgers.

To mellow out from all his drug highs, Keitel drinks booze like a fish and visits hookers. But he’s so far gone, he can’t even enjoy that. When he’s off-duty he encounters a beat officer holding two young black dudes who robbed a Korean convenience store. Keitel maneuvers to take the money from the robbers and keep it for himself, as he lets the robbers go.

A red-headed nun is brutally raped in her church by two juvenile Hispanics, who stuck a crucifix up her private part and put out their cigarette butts on her body after verbally abusing her. She outrages Keitel that she has forgiven them. The nun tells him she does so because Jesus also forgave those who reviled him. What angers Keitel further is that she also refuses to help in their capture, since she knows their names from the community, even after the church offers a $50,000 reward for their arrest. It angers him that of all the women who get raped in the city, the nun gets this special treatment. Keitel is a Catholic, but believes religion is just one big rip-off.

Keitel’s Dodgers keep losing to the Mets, and he’s down $60,000 to the Mafia. He knows they will kill him and his family if he doesn’t cough up the dough, but he urges the bookie to make one last double or nothing bet on his lock team the Dodgers. The series is now tied at three games a piece and the rubber-game will decide if he lives or dies. In one of the more inane lines of dialogue, in a film filled with such lines of futility, Keitel tells the Mafia bookie to take his bet because… “I’m no asshole, I’m a cop.”

In another revolting and unwatchable scene Keitel shoots heroin and afterwards encounters two girls from Jersey, who are driving in Manhattan without a license. He threatens to call their father and take them down to the police station to book them, as he uses his police authority in a false way to get one to bare her ass and the other to show him how she sucks a cock — as he masturbates over this.

After Keitel collects money from his drug dealer friend, which he needs to go on the run if the Dodgers lose, he gets a tip from a neighborhood woman about the rapists. He handcuffs the suspects and sits on the couch with them and watches the Mets complete their rip of the Dodgers, as he smokes crack. He then takes them to the Port of Authority and puts them on a bus, and gives them the money he got from the drug dealer. The film ends as the nun gets her wish that the rapists are forgiven, as Keitel shoots for redemption. The boys get another chance to do either good or bad in this strange world that Ferrara has made even stranger and uglier by stretching the moral boundaries.

The film leaves you believing that anyone can be redeemed, even the hateful rapists — even Keitel. So if we followed this film’s fickle logic to its conclusion, let’s not arrest anyone and let God take care of all our problems. The story was so twisted and Ferrara’s Catholicism is so suspect and his act of redemption seemed so absurd, that I thought the film should have ended by having the Mafia bookie forgive Keitel for his gambling debt of $120,000 and, I suppose, the bookie would have also found salvation.

Not the forceful performance by Keitel, nor the gritty look of the film, nor its honest depiction of drug addiction, could salvage it. The films NC-17 rating is a result of Keitel’s full frontal nude scenes. It’s also interesting to note that one of the cops in the film is Bo Dietl, a real cop who arrested the actual nun rapists the film is based on. It’s a true story that has been distorted for art’s sake. 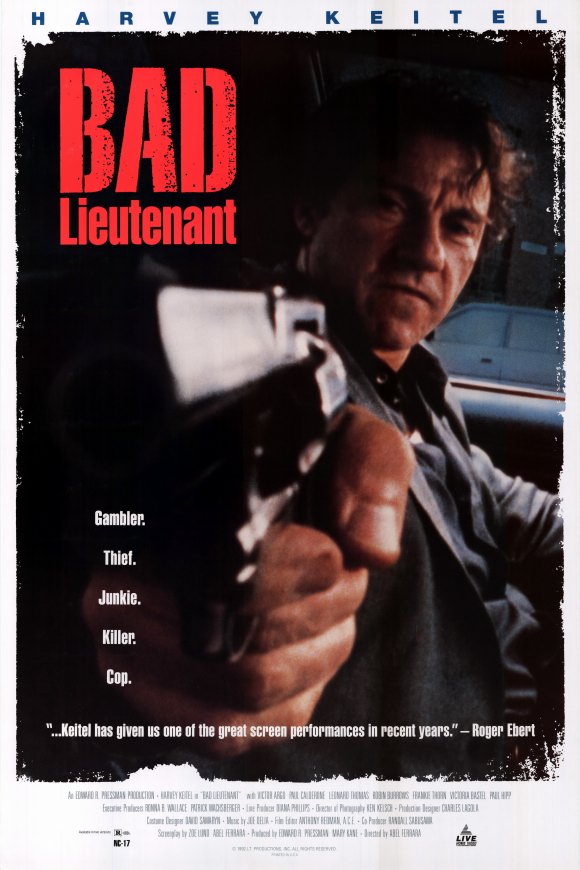