“The audience gets a chance to watch Kitano smash punks around who would probably never receive their proper punishment.”

A dirtier version of Dirty Harry, if that is possible to believe, as Azuma (Takeshi Kitano) is the lone detective who takes the law into his own hands against a yakuza organization and a corrupt police force pushing drugs. He does this while protecting his wayward sister Akari (Maiko) from the following: her tendency to go out with the wrong boy, from a gang rape, and from her drug addiction.

This directorial debut for Kitano (Hana-Bi/Sonatine) is a visual stunner in unmitigated violence. The audience gets a chance to watch Kitano smash punks around who would probably never receive their proper punishment; the viewer sees an angry cop who is psychotic in his approach to his job and is unrelenting in using his fists not his head in getting things squared away with the criminal element. He is also a glutton for punishment, as well as sadistic in dishing it out.

In the opening scene a group of teenagers beat upon a homeless man and pummel him unconscious, which prompts Azuma to come to the affluent house of one of the punky boys who did this crime; and, he goes up to the kid’s room and beats him silly, telling him by tomorrow he had better confess in the police station to what he did or he’s coming back.

This being the first day on the job for the new pompous police chief (Shiro), who calls Azuma in to berate him for how he got the kid to come down to the police station and confess to the crime. But even as the chief lectures him that he is too wild, he has to admit that he is effective in getting the job done.

The eager rookie police officer Kikuchi (Makoto) is assigned to work with Azuma and wants to learn from him how to be a good policeman. Azuma takes the up-tight rookie drinking, gambling, and freely borrows money from him. Their first case together is investigating the stabbing death of a lowly drug pusher. This crime will begin to pit the detective against a drug ring supplying the local pushers as they are supported by corrupt police, one of them being Azuma’s good friend on the vice squad, Iwaki (Hiraizumi).

There will be many twists, as Azuma in the conventional part of the story tracks down all those on the take and who are part of the operation. Finally, he goes after the gang’s enforcer, Kiyohiro (Hakuryu), who is responsible for a string of murders. They have a few action-packed face-offs that are bloody, and they question the officer’s ethics as he plants drugs on the gay assassin and tries to kill him while questioning him in the locker room of the police station.

The head of the yakuza organization is a ruthless drug kingpin called Nito (Kishibe). He had hired the sadistic Kiyohiro to do two murders, one of a low level drug pusher named Emoto and the other of the corrupt cop, Iwaki, not the extra third one Kiyohiro mistakenly threw in. Taking advantage of the weakness in the yakuza operation, Azuma takes them on single-handedly; but, his corrupt superior officers suspend him from the force.

Kitano is depicted as someone who is unstable, going through mood swings of emotional tenderness for his unstable sister and then to one of explosive violence against the drug dealers. It’s an action flick that questions one’s sensibilities and has enough original twists to keep you guessing about the extent of the corruption and what method Kitano will use to kill off the yakuza. There was something very likable about Kitano’s monster cop that might be hard to rationalize, but it does draw him close to the audience in a surprising way. If you like your violence with a dose of some intelligent dramatics thrown in for good measure, you should find this well-paced film satisfying to some degree. But you better have a strong stomach for graphic violence! 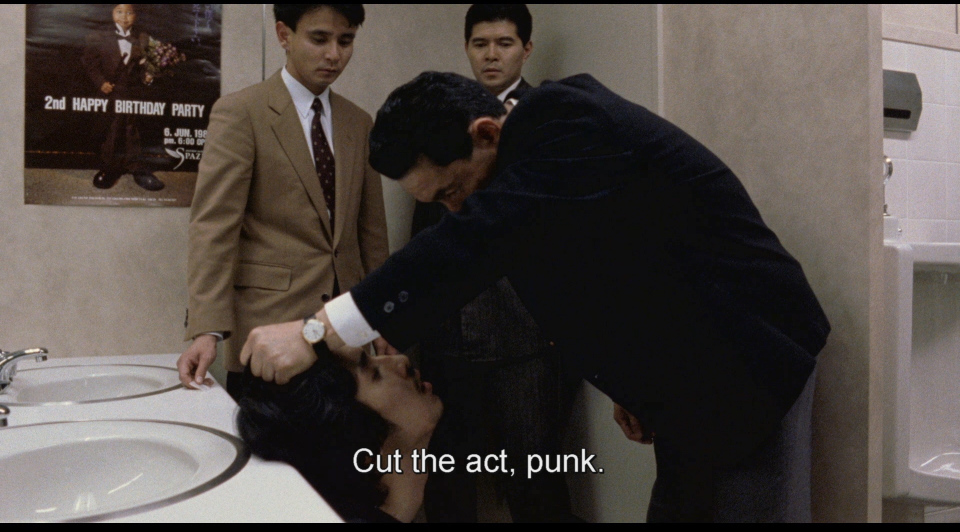