“Serves as a moralizing Hollywood lecture on racial prejudice against Japanese-Americans during World War II.”

Serves as a moralizing Hollywood lecture on racial prejudice against Japanese-Americans during World War II. Director John Sturges (“Mystery Street”/”Kind Lady”/”The Satan Bug”)builds the tension as he tells of a hate crime against a Japanese farmer uncovered by a wounded war hero who returned to the States after the war ended and brings justice to an isolated Western desert town. It’s based on the story “Bad Day at Hondo” by Howard Breslin and is written by Millard Kaufman and Don McGuire.

Set in the summer of 1945. The pic opens with a well-dressed man in a suit and fedora, the one-armed mysteryman John J. Macreedy (Spencer Tracy), who keeps his lame hand in his pocket, getting off on an unscheduled Streamliner train stop in the remote Western desert small-town of Black Rock (filmed at Lone Pine, California). We’re told this is the first-time a train has stopped in this desolated spot for four years. The townies are hostile. When Macreedy inquires about a Japanese farmer who bought a farm in the desert four years ago and is now missing, he’s given the run around and is bullied by thuggish cowboys Coley (Ernest Borgnine) and Hector (Lee Marvin). The bullies, as well as the cowardly station-master and telegraph operator (Russell Collins), take their marching orders from redneck rancher Reno Smith (Robert Ryan), who blindly hates Japanese people and strangers.

Macreedy snoops around in his one day visit to learn that the missing farmer’s house was burned to the ground and he was slain by Reno and his henchmen, and that they intend to trap him in town and kill him before he takes the next day train and reports his suspicions to the state police.

By the end, we learn that the Japanese-American farmer’s son was a war buddy, who saved Macreedy’s life in Italy by sacrificing his. As a payback, Macreedy visits the town to find out why the soldier’s farmer is missing.

The laconic Macreedy, an expert in karate, encourages the useless drunkard sheriff (Dean Jagger) and the apathetic doctor (Walter Brennan) to get up enough courage to help him bring the baddies to justice. While the nervous hotel clerk (John Ericson) and his scheming garage owner sister (Anne Francis) try to figure out on whose side they should be.

There’s no logic for why the town villains want to kill the stranger, especially since he has no proof of their guilt. Everything about the plot seemed unreal and was only interested in getting to its politically correct agenda. Also, the characters are all one-dimensional types fitting stereotypes. As a thriller it only worked because of the superior cast, the fiercely economical way Sturges shot the film and that it adeptly captured the creepiness of the small-town’s xenophobes. 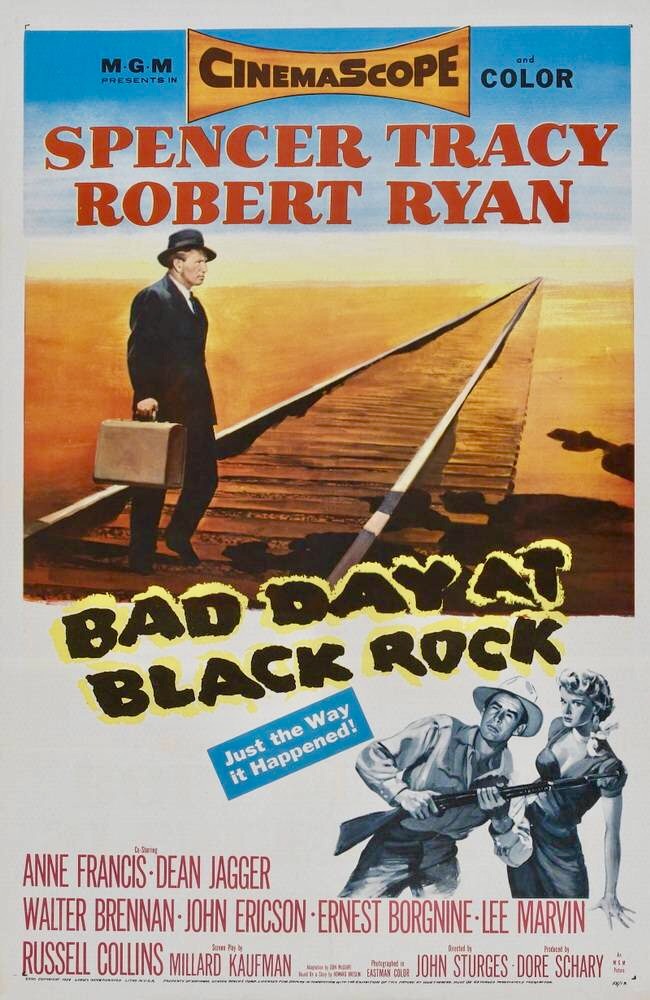