“A weakly scripted and acted minor film noir about a boxer influenced to go on the wrong path by a femme fatale.”

A weakly scripted and acted minor film noir about a boxer influenced to go on the wrong path by a femme fatale. A “The Postman Always Rings Twice” twist type of film. Johnny Flanagan (Tony Wright) is a nice guy boxer from Liverpool, who hooks up with trainer Sharkey (Sid James) and small-time promoter Charlie Sullivan (John Slater). They introduce the boxer to the wealthy boxing manager Giuseppe Vecchi (Valk), who pays for his training and promotions and becomes a full partner. Giuseppe is married to a much younger woman, the gold digging sexpot Lorna (Barbara Payton). Johnny immediately falls under her spell, as they form a love-hate relationship.

Soon Johnny and Lorna begin a secret affair. Lorna tells Johnny she’s pregnant with his child, but he’s not sure if the father is him or her husband. Despite his doubts, Lorna tells him she loves him and talks him into killing her husband — as he makes it look like a drowning accident. When Giuseppe’s mother and sister arrive from Italy for the funeral, they suspect Lorna because she’s acting so nervous and she faked being pregnant. Johnny becomes guilt-stricken and wants to go to the police when Lorna tells him her pregnancy was a lie. When Lorna can’t stop him, she poisons the fighter and makes it look like a suicide.

The most interesting aspect, was the real troubled life of Barbara Payton. The once promising Hollywood starlet (Kiss Tomorrow Goodbye /Murder is my Beat) was the trophy sexual object of a fistfight between actors Franchot Tone and Tom Neal. As a result, Tone ended up in the hospital. According to her autobiography Tone married her soon after, but divorced her seven weeks later accusing her of adultery with Neal. The scandal put a damper on Payton’s career. Payton eventually ended up as a call girl and was arrested for prostitution, drunkenness, and passing bad checks. Payton told her story in a sensational autobiography titled “I Am Not Ashamed.” 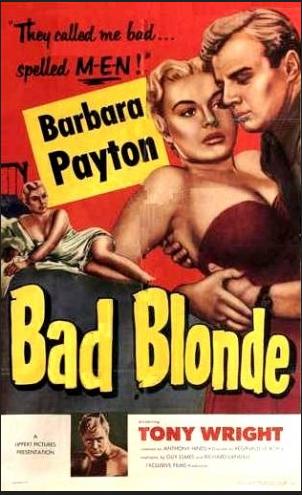