“This bachelor party is as much fun as riding the NYC subway late at night without a cop in sight.”

The team of veteran TV director Delbert Mann (“Middle of the Night”/”Desire Under the Elms”/”That Touch of Mink”) and writer Paddy Chayefsky follow-up their smash hit “Marty” from a year ago with this story about a stag night out on the town for anxiety-ridden middle-class bookkeepers who work in the same Manhattan office. Like Marty, it first played on television as a live play and was a hit. Though dated, directed in a static manner, let down by the heavy-handed message conclusion that “life is nothing if you don’t love someone” and looking too drab to be entertaining, the sharp ensemble cast and the heartfelt observations of those caught in the system in the 1950s still gives the drama an incisiveness that rattles the cages about marriage, job security and finding one’s own path in the cold world.

The film is seen through the eyes of nice guy but staid bookkeeper Charlie Samson (Don Murray), who lives with his sweet wife Helen (Patricia Smith) in their comfy middle-income Stuyvesant Town apartment. The couple is expecting their first child, while the ambitious Charlie goes to night school to advance his career as an accountant and thereby he leaves Helen alone nights as she either watches television or spends time with her sister-in-law Julie (Nancy Marchand). The newlywed Charlie is concerned he doesn’t earn enough presently to raise a family, Helen is concerned with saving the once happy marriage.

At work, Charlie is talked into attending a bachelor party given by swinging bachelor Eddie Watkins (Jack Warden)for their coworker Arnold (Philip Abbott), a timid virgin thirty-year-old who is fearful he’s not man enough for his war widow bride. The party starts off at a restaurant where they shower the groom with useless gifts and the celebrants get plastered and let their guard down to tell of how unhappy they are with their dull lives. While the men go pub crawling in Greenwich Village, a drunken Charlie flirts with a loose bohemian lady (Carolyn Jones) he meets in the street and she invites him later to a Village party. They then go to Eddie’s pad to watch stag movies. Stopping off next in a pub, Charlie complains to a henpecked coworker Ken (Larry Blyden) that since he’s married he has no time for fun, but Ken goes home to his wife and children and Charlie decides to ignore Ken’s sound advice to also go home and stays to have some fun. The group, under Eddie’s suggestion, attends a strip club and then Eddie goads Arnold into seeing a prostitute, and Arnold gets Charlie to come along for support. Arnold chickens out of doing it with the prostitute and confesses to Charlie that he feels sexually insecure. After Charlie calms him down, they join the others in the pub. The 48-year-old Walter (E. G. Marshall), usually a pleasant man, goes on a troubling drunken rant about how his doctor said he would die if he doesn’t move to Arizona for his asthma and how he can’t afford to quit his job to risk not finding work there. Finally, after Walter bolts, Eddie talks the remaining members of the group, Charlie and Arnold, to go to the Village party. There Charlie meets the floozy beatnik woman from before and in the bedroom she tells him “Just say you love me, you don’t have to mean it.” This opens Charlie’s eyes to see that what he has is a good thing and not to blow it. A drunken Arnold is taken back to his Queens apartment and must get up enough courage to apologize to his fiancée for calling up just before to say the marriage is off, and is urged by Charlie to just tell the truth about his fears. Meanwhile Eddie, who was once viewed by the marrieds as a happy-go-lucky guy, is now viewed as a lonely man who has no one to love despite his bravado.

The groom is more a plot device than a real character, and having the other characters reflect off his marriage fears seems to be a disingenuous way to tell a story. All the observations might be heartfelt but they are mundane, making this a despairing watch. This bachelor party is as much fun as riding the NYC subway late at night without a cop in sight. 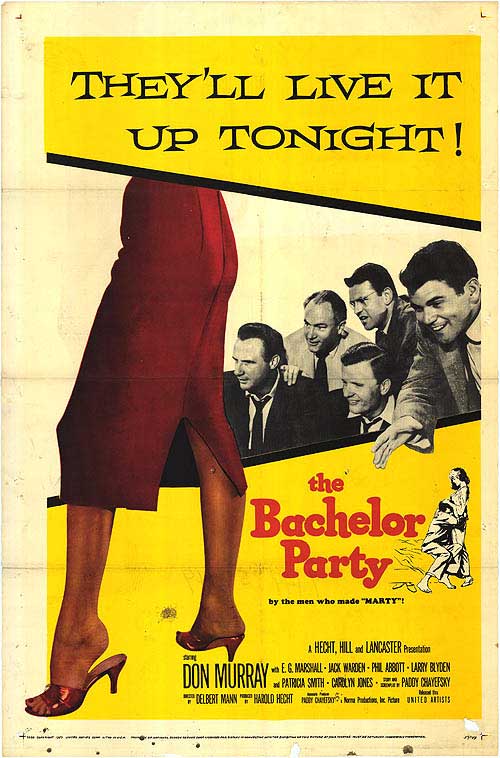