“Racy melodrama made before the Production Code.”

Racy melodrama made before the Production Code. This film led to the adoption of the Production Code in 1934. The Code virtually put an end to sexy films like this of ‘sleeping your way to the top.’ Warner Brothers under pressure from the New York State Board of Censors, changed the amoral ending to an “acceptable” one that has the notorious heroine turn over a new leaf and conform to societal expectations on how a woman should behave.

It’s a Depression Era rags-to-riches story about Pittsburgh barmaid Lily Powers (Barbara Stanwyck), who works in her father Nick’s speakeasy and is forced by him to serve more than liquor to the mill worker clients. When her abusive dad dies in a workplace still explosion, the hardened streetwise Lily leaves for the Big Apple with the speakeasy’s Negro kitchen worker Chico and vows to get revenge on men. She gets a job as a file clerk on the first floor in the Gotham Trust Company by screwing Mr. Pratt, the personnel executive, in his basement office. Once on the job she lures handsome office boy Jimmy McCoy Jr. (John Wayne) to help her advance up the corporate ladder and dumps him when she lands the bigger fish Mr. Brody (Douglas Dumbrille), a manager in the mortgage department (also on a higher floor). Lily gives Brody the gate when he’s caught in her arms during office hours by his boss Ned Stevens (Donald Cook) and is fired. Instead of firing Lily, the accountant department head Stevens makes her his receptionist (on a higher floor). Though Stevens is engaged to the lovely daughter of the firm’s veep Ann Carter, he fools around with the ruthless gold digger Lily and gets caught by Ann while they are embracing. Lily purposely set Stevens up, who is so love sick he refuses to fire her as requested by bank Vice President J.P. Carter (Henry Kolker). Old man Carter becomes Lily’s sugardaddy and sets her up as a kept woman in a Park Avenue penthouse and buys her fur coats and jewelry, but when an insanely jealous Stevens catches them together he kills Carter and then himself. The scandal rocks the bank and new president Courtland Trenholm (George Brent), the playboy grandson of the bank’s founder, takes over upon request by the board of directors. To stop any further scandal to the bank, Trenholm offers Lily a job in their Paris bank and some $15,000 so that she won’t sell her story to a newspaper for $10,000. When Trenholm visits Paris, he falls in love and in a whirlwind courtship marries her. When the bank comes under attack for mismanagement, Trenholm is indicted and needs Lily to help him out financially to wage an expensive court fight to save his name. Lily carries a briefcase with a half million in jewels and securities, believing “someday I’ll have the other half.” This money she got from men as gifts, but she can’t part with it and refuses her hubby the money. The cold-blooded seductress, preparing for her future major role a decade later as Phyllis Dietrichson in Double Indemnity, has a change of heart and goes to her suicidal hubby just in the nick of time to offer her help. The phony ending has Lily’s money save the bank from failure and she returns broke with her hubby to Pittsburgh, where he becomes a laborer. The point layed on thick is that men’s lives will be ruined by being with sluts and that immoral sex does not pay.

It’s directed by Alfred E. Green (“The Jolson Story”/”Sierra”), with the story’s first half fast paced, steamy and filled with pungent dialogue. The second half loses much of its steam, as things become far too artificial. It’s taken from a story by Darryl F. Zanuck and scripted by Gene Markey. Zanuck got into a conflict with the studio over a union issue and left to form his own company of 20th Century-Fox. What remains powerful is Stanwyck’s tour-de-force performance, with her at the top of her game. 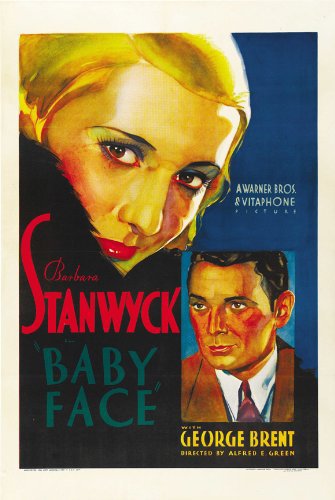