BAADASSSSS!(a.k.a: How to Get the Man’s Foot Outta Your Ass)

“A personal film shot from the heart.”

Khleo Thomas plays Mario Van Peebles as a youngster. Mario Van Peebles (“New Jack City”) plays his father Melvin Van Peebles, who arguably made the most important black American film of its time Sweet Sweetbacks Baad Asss Song. This comes after Melvin shot two critically acclaimed films–in France “Story of A Three-Day Pass” and then a Hollywood comedy “Watermelon Man”–and seemed to be on his way in Hollywood to a three-picture deal. But he wanted to shoot a realistic film about the brother instead of another lighthearted comedy and couldn’t get the Hollywood suits to back him.

“Sweetback” is a portrayal of a black hustler who turns revolutionary after he witnesses a political activist beaten by racist cops and kills the cops, goes on the run, screws a white woman and escapes. The 1971 blaxpoitation film was made independently on a shoestring budget with Melvin putting up $70,000 of his own money and receiving a loan of $50,000 from Bill Cosby to finish the picture. It was shot guerrilla-style by a ragtag crew of mostly amateurs and minorities in opposition of the Hollywood studio system and the usual stereotypical way they portrayed blacks. Sweetback’s unknown cast starred ‘The Black Community,’ and it was dedicated to ‘all the Brothers and Sisters who had enough of the Man.’ It was a totally uncompromising flick shot exactly the way the director wanted, and it turned out to be a surprising box-office hit (it grossed more than $15 million)–a precursor to Shaft. This one of a kind film created a new avenue for African-American actors and filmmakers, giving renewed energy to the black community and serving as a lesson that for those who are persistent there’s a way of getting a film made and shown without the backing of Hollywood as difficult as that may be.

Baadasssss! plays as a docudrama, as it was too fictionalized to be a documentary despite its interviews at the film’s end credits with some of the real people involved. What makes this film special is that it reconnects Mario with his self-absorbed, cigar-smoking, motorcycle-riding, bandanna-wearing egomaniacal, womanizing, strict, macho father, as Mario was only 13 at the time and perhaps more than anyone else knows what it was like to work with his beleaguered and bullying dad on that film. Mario had a small role (playing his father as a youngster), where he had sex for the first time with an older prostitute. The son revisits the making of the legendary film and tells it without trying to hide his dad’s ugly side, but nevertheless pays his dad the ultimate compliment by saluting him for making his dream come true in this tremendous accomplishment. Melvin made the film despite a lack of funds, backers, film stock, acceptable story, loss of sight in one eye, union thugs, and the weekend arrest of his film crew and cast for impersonating police officers. His troubles weren’t over after he finished the film, as he had difficulty getting a distributor and when released only two theaters in America agreed to show it. The Goldberg brothers showed it in Detroit, and through Melvin’s self-promotion efforts, word of mouth and the Black Panthers who rallied to the film’s defense it became a big hit in the black community.

Baadasssss! differs greatly from the X-rated “Sweet Sweetbacks,” as it is more tame and pedantic. It successfully attempts to accurately record for history the impact the film had on the American film scene and the black community. It is also a reminder of how difficult it still is for black indie filmmakers to make a film that sticks-it-to-the-Man, as you can ask Spike Lee to confirm that.

This film was both entertaining and informative, while also touching a nerve on the complicated father-son relationship that not only showed much resentment but much love and respect. Though more reserved than dad’s signature film, Mario’s film caught some of the same vibrant energy. It’s a solid effort, a personal film shot from the heart. Though some of its more arty conceits felt flat and its gushing sentiments for dad seemed a bit much considering they hardly talked during the making of the film. It resulted in an uneven film that was resolved as a cliché success biopic story–with many of the characters too stereotyped to be credible, which is something his father’s film could never be accused of. 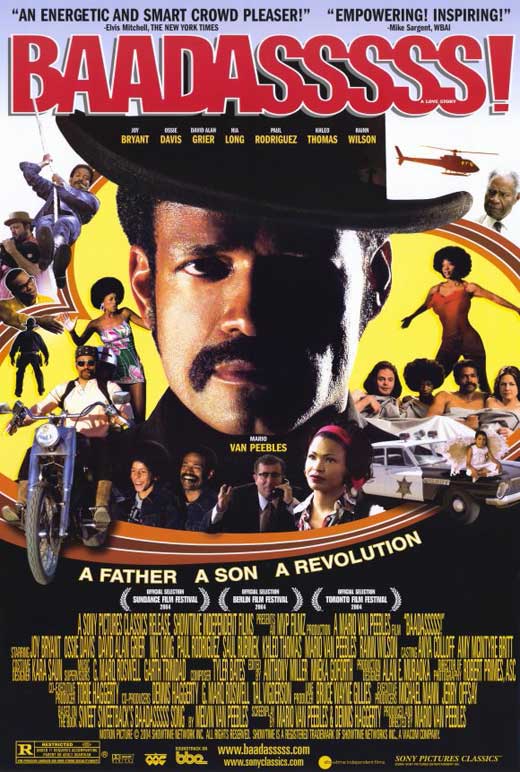