“Filled with sentimentality, pretensions, unfulfilled ambitions and a host of dull characters faced with life threatening problems that verge on the ludicrous.”

Director Daniele Thompson (“Jet Lag”) directs this feel-good soap opera story as if she’s baking a confection. She co-writes it with her actor son Chris Thompson (he plays Frédéric Grumberg). It has higher aspirations than being a sudser but is let down because it’s filled with sentimentality, pretensions, unfulfilled ambitions and a host of dull characters faced with life threatening problems that verge on the ludicrous. The frothy crowd-pleasing trifle breezily unfolds almost entirely on Paris’s notable Avenue Montaigne, a rich street of fashion, theater and art for the privileged.

The cheerful, youthful provincial Jessica (Cecile De France) leaves her elderly granny’s (Suzanne Flon) home in Macon with her blessings, to follow in her footsteps (she once worked at the Ritz Hotel), and is told to find work in top-flight hotels and restaurants to hobnob with the celebs and the rich to see if their success can rub off. The innocently aggressive Jessica is an impoverished gamin who comes to Paris with only a backpack and aims to push her way to the top with the movers and shakers even though she doesn’t show a talent in anything but being nervy. Her first chutzpah act is to snag a waitress job on the exclusive Avenue Montaigne at the modest Bar des Theatres, as the grumpy manager Marcel breaks tradition and hires his first female because he’s in a pinch with three big events occurring simultaneously across the street  a recital by world-renown pianist Jean-François Lefort (Albert Dupontel), the opening of the Feydeau farce with popular soap opera star Catherine Versen (Valérie Lemercier) in the leading role and an auction of 20th-century masterworks from the collection of widowed millionaire art collector Jacques Grumberg (Christopher Thompson). This puts the friendly Jessica in the midst of all the bustle and she takes to it like a fly to manure. Delivering room service to the pianist, she makes herself available to him as the rep of the common masses and upon his request tells him her life story. We then learn that the pianist is weary of his career moves, saying “classical concerts keep us from music just as religion keeps us from God.” He plans to abandon his successful stuffy snobbish elitist black-tie career to play only in jeans and a T-shirt in front of small worthy groups and live a solitary life in the country, but his beautiful wife and manager, Valentine (Laura Morante), who quit her promising career as a cellist to devote herself entirely to him, is not willing to accept that and their happy marriage of thirteen years might be coming to an end. While Jessica is serving the bitchy and neurotic actress Catherine, we learn that the actress has become rich and famous doing crappy daytime television shows and she’s now hotly pursuing the lofty part of Simone de Beauvoir in an American director’s (Sydney Pollack) upcoming classy film to be shot in Paris while making a pest of herself as a prima donna with the pretentious stage director (trying to make an arty modern production out of such a traditional musty lowbrow play) while unhappily getting ready to appear in the theater production of the Feydeau farce. Jessica also bumps into Jacques Grumberg (Claude Brasseur) while on the job; the sickly man is in town to auction off his valuable lifetime art collection (that includes a Brancusi and a Braque) he put together with his beloved late wife and we learn that he’s now a sugar daddy to the sexy gold-digger, Valerie (Annelise Hesme), who unknown to him was three years earlier his dour professor son Frédéric’s mistress. The judgmental Frédéric’s marriage is breaking up because he’s such a dick to live with. After meeting Jessica accidentally in the street and again in the restaurant, they begin an affair even though Frédéric is stressed-out and suffers from ulcer inducing backaches. Their love affair serves as a happy ending for the film, as the insufferable central character Jessica, the only happy character in the film besides her granny, has evidently accomplished her lifetime ambition with this romance.

It’s a polished up Gallic sudser that serves as safe and predictable nostalgia and middlebrow entertainment for the masses, but the ridiculous fluff story is forgettable, not really funny and the impressive cast is given little to do to show off their acting stripes. I also think it might have given me a backache from all the strain involved in viewing such an unbearable story that tries very hard but unsuccessfully to say there’s little difference between highbrow and lowbrow art, as they crossover because art is merely entertainment. 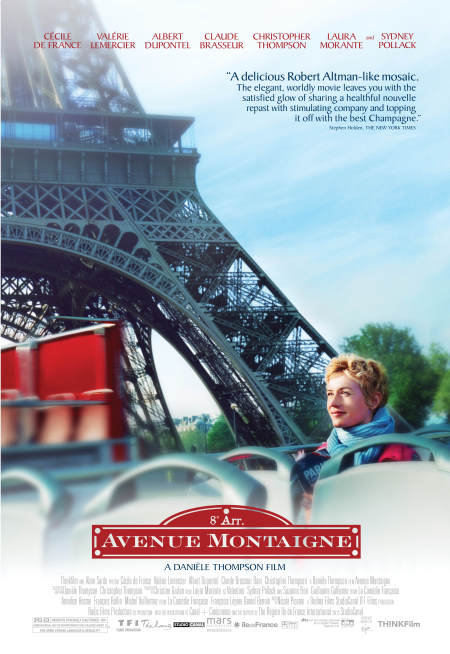