“A lightweight stylish film that out dances its missteps.”

Aventurera is an unintentionally funny melodrama that is part musical and part film noir; the clunky presentation falls into the category of a cabaretera film (a camp musical drama of postwar Mexican cinema). Its title is translated into English as The Adventuress. It tells an implausible and hokey sob story adventure tale of an innocent blonde young girl, Elena (Ninón Sevilla, Cuban actress/dancer), who becomes disillusioned when her peaceful life in Chihuahua is shattered. After Elena comes home early from school she finds mom embracing her secret lover. Her bourgeois mother Consuelo Tejero (Maruja Grifell) then runs away and disappears with her lover and her distraught father commits suicide. Elena flees to Juarez to start life anew in a legitimate job, but on her jobs as a secretary and waitress she’s repulsed by the men who sexually maul her. Without work, Elena meets a disreputable acquaintance she met in her hometown, Lucio Saenz (Tito Junco), and he takes her to a fancy nightclub for dinner. Promising her a secretary job, Elena is plied with liquor. In that drunken condition she’s delivered by white-slaver Lucio to the bordello madame, Rosaura (Andrea Palma), who drugs her and makes her become a prostitute and nightclub dancer (the nightclub is a front for the brothel). When Elena threatens to leave Rosaura’s enforcer, Rengo (Miguel Inclán), threatens to disfigure her face with his knife. Elena becomes a first-class call girl and dancer, but her temper with the paying clients gets her into trouble with Rosaura. Rengo is ordered to beat her. Lucio interferes and acts as Elena’s protector threatening to kill Rengo, but is stopped by Elena. Then Lucio robs Rosaura and flees with Elena in tow. Also present are two of Lucio’s henchmen, Frog and Pacomio (Jorge Mondragón).

Lucio plans a daring jewelry robbery with his gang, and uses Elena as the getaway driver and lookout. But Pacomio refuses to go along with the robbery because he’s scared of getting caught. That gets Lucio’s wrath, who kicks the cowardly Pacomio out of the gang. To get revenge for being treated so roughly, Pacomio snitches for a price to Rosaura about the intended heist. Rosaura then informs the police, who set a trap for the gang. They kill Frog while Lucio is apprehended, and when convicted gets a 20 year sentence. Elena escaped before the cops came, and flees to Mexico City to become a big star as a nightclub singer and dancer. Visiting rich society lawyer, Mario (Ruben Rojo), from Guadalajara, naively falls for her and proposes. Moments later the creepy Pacomio pops up unexpectedly in Elena’s dressing room and blackmails her for half her dancer’s check or else he threatens to rat her out to the police that she was in on the robbery. Elena gets out of the creep’s clutches by marrying Mario, whose mom happens to be the dowager Rosaura (speaking of coincidences that seem contrived to fit the plot!). The society lady has kept her Juarez life a secret from everyone.

Elena’s tortured adventure in the sinful nightlife of the big cities, where she was corrupted, continues to pile up hard to believe situations, as she plots her revenge on all who forced her into prostitution and ruined her life. In between the many unlikely plot twists there’s music and dance, where Elena makes like Carmen Miranda and does a few numbers with fruit on her head. 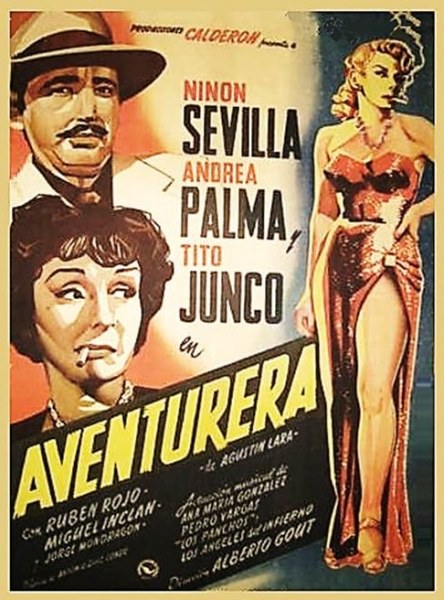