“It crackles with energy.”

This provocative war drama sings out with tragi-comedy overtones and is one of Polish director Jerzy Kawalerowicz’s (“Death of a President”/”Night Train”/”Mother Joan of the Angels”) best films. It crackles with energy, warmth for a bygone era, a feel for history, a lushness, a recognition of the unique Jewish humor over facing tragedy and offers a perceptive insight into human nature. It’s based on the 1966 novel by Julian Stryjkowski (born to an Hassidic family), who cowrites it with the director and Tadeusz Konwicki. Kawalerowicz has said that he wanted “the film to be a movie of great metaphor, similar to a passionate, dynamic painting, which shows the world of Jews a moment before the tragical doom.”

It’s set in Polish Galicia, on the Russian border, in 1914, on the first day of World War I. A wise old Jew, resigned to suffering for being Jewish and a doubter, Tag (Franciszek Pieczka), owns a country border inn (Austeria in Galician) with his daughter Mina and her daughter Lolka. He’s sleeping with his sexy much younger goy peasant worker Yevdokia (Liliana Glabczynska). Soon a stranded Hungarian hussar officer, cut off from his regiment, hides in the inn from the Cossacks and then a group of city-dwelling Jews running away in terror from a ransacking Cossack army also end up staying at the inn, which is only a short distance from the burning town. They are joined by a tzaddik (Wojciech Standello), a revered Hassidic rabbi and his band of devout followers who obey his every command and loudly sing to remove sin from their system and forget the danger. Unfortunately the innkeeper can’t get these zealots to stop singing and endangering everyone’s life by calling attention to the inn. They are all trapped there for the night, and a number of startling relationships develop as well as a few political arguments and domestic squabbles. There’s also a dead young actress named Asia (Ewa Domanska), who was killed by the Cossacks in a meadow when running away from the advances of her sexually obsessive boyfriend Bum (Marek Wilk) who is also in her father’s acting troupe.

The story’s most poignant philosophical moment has Tag give his Jew survivor lament, that Jews don’t kill and the only defense they have in this world of Hamans is to have a pure heart. It’s very much an Old World story of pogroms, and of a beleaguered Jewish community that vanished long ago except for the fanatically devout Hasidim. Austeria gets to you because it’s so in your face sincere, and it brings home the borscht because it’s so tasty and exquisitely filmed.

It won the Grand Prix Gdansk Film Festival in 1984. 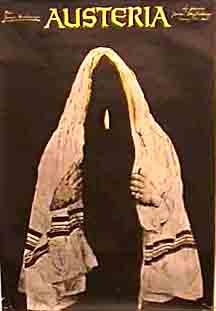