“Avoids sentimentality, clichés and bombast, as it instead touches the heart in a moving and unforgettable way.”

Writer-director Louis Malle’s (“Murmur of the Heart”/”Atlantic City”) autobiographical ”Au Revoir les Enfants” (”Goodbye, Children”), his first film in ten years, is Bresson-like and told with authenticity, sincerity, simplicity and heartfelt force. There’s not one false note in this masterpiece. It’s based on a tragic event that took place during January 1944, when the then 12 year old Malle was attending a Jesuit boarding school for the wealthy near provincial Fontainebleau in Nazi-occupied France. This incident has always haunted Malle, and this is the film he has always wanted to make to get things off his chest and say something meaningful about the bigotry and ignorance back then that led to such a tragedy. It fulfills his aim, as well as featuring some amazing people who acted as true Christians in good faith. It shows the love and affection Malle has for his characters, even as he makes his protagonists not all that lovable. It’s an honest film that avoids sentimentality, clichés and bombast, as it instead touches the heart in a moving and unforgettable way.

At the end of the Christmas holidays in January 1944 the popular 12-year-old Julien Quentin (Gaspard Manesse) and his more frisky older brother François (Stanislas Carré de Malberg), who takes pleasure in giving the Nazi soldiers the wrong directions, return to the Catholic boarding school from visiting their good looking mom (Francine Racette)–who clearly favors her youngest child. The school has three new students enroll for the new semester. We soon learn they are Jews using false names, and are protected by the courageous headmaster Father Jean (Philippe Morier-Genoud). None of the other students know, but the teachers must because they go out of their way to be helpful to their mysterious guests. The youngest of them is named Jean Bonnet (Raphael Fejtö). He becomes Julien’s classmate and main rival for scholastic honors; and then, after a period of scuffling, they become best friends. Julien is viewed as Malle’s alter ego. He will confess to not ever knowing a Jew and ask his brother what is a Jew. The brother tells him, they are people who don’t eat pork and are hated because they are so smart and are blamed as Christ killers. Curious about his new friend, Julien snoops around until he discovers his real name is Kippeinstein.

The rhythms of school life for the active boys is captured in the following episodes: they are challenged in their classes over such rigorous subjects as Greek; going on a treasure hunt in the woods; reading secretly under the covers after curfew the erotic Arabian Nights; classes are cut short as they take shelter in the basement for the occasional air raid; cutting up during recess in the schoolyard while playing games on stilts; short-sheeting beds; trading for black market items with the envious lower-class young kitchen worker Joseph (Francois Negret); looking at dirty postcards; and having a yen for the pretty young piano teacher whom they eagerly engage for their lessons.

The climax comes when the school is betrayed by a disgruntled former employee, who brings in the Gestapo. They go through the school and arrest the three Jewish students and the headmaster, and in the end credits we learn of their fate after they were sent to concentration camps.

It can be viewed as a coming-of-age film, where Julien loses his innocence as he learns first hand how the Nazi war machine operates and how deadly hatred can be. 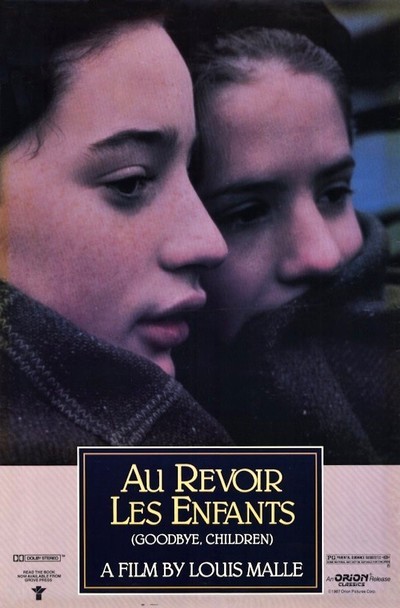