ATTACK OF THE CRAB MONSTERS

Roger Corman (“The St. Valentine’s Day Massacre”/”The Tomb of Ligeia”/”Tower of London”) produced and directed this leaden, hokey and poorly acted second-rate tongue-in-cheek atomic radiation monsters gone amok horror film, which is further done in by how silly the giant land crabs look (it was made out of Styrofoam and the entire front of the mutant giant crab was a stiff caricature of the human face) even though the premise of mind assimilation is rather ingenious and might even be scientifically possible. Attack of the Crab Monsters cost $70,000 to produce and took in over $1 million at the box-office, and has since become a minor cult film. The black-and-white film had suspense or action in every scene as written by Charles B. Griffith, and an eerie score by Ronald Stein aids its cause to be scary and set an ominous mood.

Ensign Quinlan (Ed Nelson) delivers by a U.S. Navy seaplane, to a remote Pacific atoll that is slowly crumbling into the sea and has only seagulls and crabs, a team of brilliant scientists led by nuclear physicist Dr. Karl Weigand (Leslie Bradley); the others are the romantically linked biologists Dale Drewer (Richard Garland) and Martha Hunter (Pamela Duncan), as he works on land animals while she works on sea life; geologist Dr. James Carson (Richard H. Cutting), who will try to determine what’s happening to the soil; French botanist Jules Deveroux (Mel Welles), who will examine the plant life for radiation poisoning; navy demolition experts Ron Fellows (Beech Dickerson) and Sam Sommers (Tony Miller); and electronics specialist Hank Chapman. They are to study the effects of atomic fallout from nearby H-bomb tests and what happened to the other team of research scientists led by McLean, who left an unfinished curious journal about the two mutant giant crabs in their encampment but vanished without a trace during a storm.

When Quinlan and his crew leave to fly back to their base, their plane explodes on takeoff and kills the crew. Soon afterwards Karl and Jim discover a fifty-foot-deep cave-in on the trail they had taken to the beach. Also, members of the team hear a voice identifying itself as McLean and begging for help. Lured by the voice to the newly created pit, some scientists meet their doom. It seems that the victims become part of the crab (who likes amputating heads) and now they use their own voices to lure other victims to their death (like the song “Misery Loves Company!”). The group is getting picked off one-by-one, and all bets must be placed fast to pick out the survivors before you lose the best opportunity to keep up your interest in the pic as the plotline nonsensically ambles along.

The scientists theorize that the two giant crabs they spot have been created by radiation, and that they are assimilating characteristics of the human victims they are eating as they absorb their brain tissues and minds; the mutant crabs are also deliberately destroying the island by causing earthquakes.

It boils down to Martha, Dale and Hank, the only three survivors, confronting the one remaining giant crab, who they dispatch with electricity–just like it was done in The Thing. 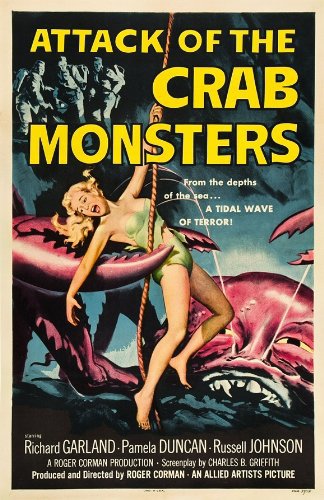