“The performances are generally outstanding (Dafoe is at his best as Van Gogh), but the evocative film is far from a definitive one and more about capturing some fervid moments in the artist’s life.”

An unconventional homage biopic on the troubled last days of the Dutch painter Vincent Van Gogh, who committed suicide in 1890, at Auvers-sur-Oise (France), at 37. The performances are generally outstanding (Dafoe is at his best as Van Gogh), but the evocative film is far from a definitive one and more about brilliantly capturing some fervid moments in the artist’s life. Artist-turned-director Julian Schnabel (“Miral”/”Lou Reed’s Berlin”) is the director and co-writer with Louise Kugelberg and Jean-Claude Carriere, who provide an engrossing and idiosyncratic screenplay. The narrative is attributed to Van Gogh’s letters with the filmmaker’s addition of fictional scenes created by the writers.

The aim is not to be necessarily factual, but to try and get into the artist’s head and explore his visions, why he must paint, the madness that drives him off-course and relate to the artist’s process to create art. Though this experimental approach is sometimes not pleasing and even seems ridiculous by its odd characterizations but, as far as I’m concerned, despite the many versions of Van Gogh on film, only Paul Cox’s Vincent: The Life and Deathof Vincent Van Gogh (1987) was a more satisfying film.

Vincent Van Gogh (Willem Dafoe) finds Paris unbearable and his merchant art dealer brother Theo (Rupert Friend) offers love and support but can’t sell any of his brother’s paintings. To escape his failed life in Paris, in the 1880s, Vincent, with the financial assistance from Theo, sets up a residence in an unkempt room, in the provincial town of Arles, in the South of France, where he falls in love with nature (those wheat fields and flowers wow him) but his happiness is marred by his new neighbors’ ignorance and hostility. Things perk up when his artist friend from Paris, Paul Gauguin (Oscar Isaac), arrives in Arles and he has his equal to talk art to. Vincent tells him he wants to paint the sunlight because his vision when focused on nature gives him something to see and takes him closer to the reality of the world. He thereby tries to convince the arrogant Gauguin that he is his paintings, as the cynical Gauguin replies that he paints too fast and that his art looks like sculpture because he over-paints. Van Gogh’s tragic self-mutilation of his left ear comes about (off-screen) because he can’t bear to live without Gauguin’s company, who abruptly tells him now that I have sold a few paintings in Paris and have established myself, it’s time to cash in on the fame by being there with those who can help me most.

The ear incident gets Vincent placed in an asylum. After a long and passionate conversation with the cold priest (Madds Mikkelsen) at the asylum, who despises his art, he is nevertheless released. But unable to stop having haunting visions, Vincent goes into a state of confusion and can’t remember that he shot himself in the stomach and dies two days later. The shaky hand-held camera by cinematographer Benoît Delhomme captures the nature Van Gogh lived for.

While the lyrical film captures the tormented mind of the artist, who couldn’t stave off the darkness that made him violent to himself even if his visions captured the light and propelled him to paint like a mad genius. Vincent lived by the simple belief that says “I feel God is nature and nature is beauty.” 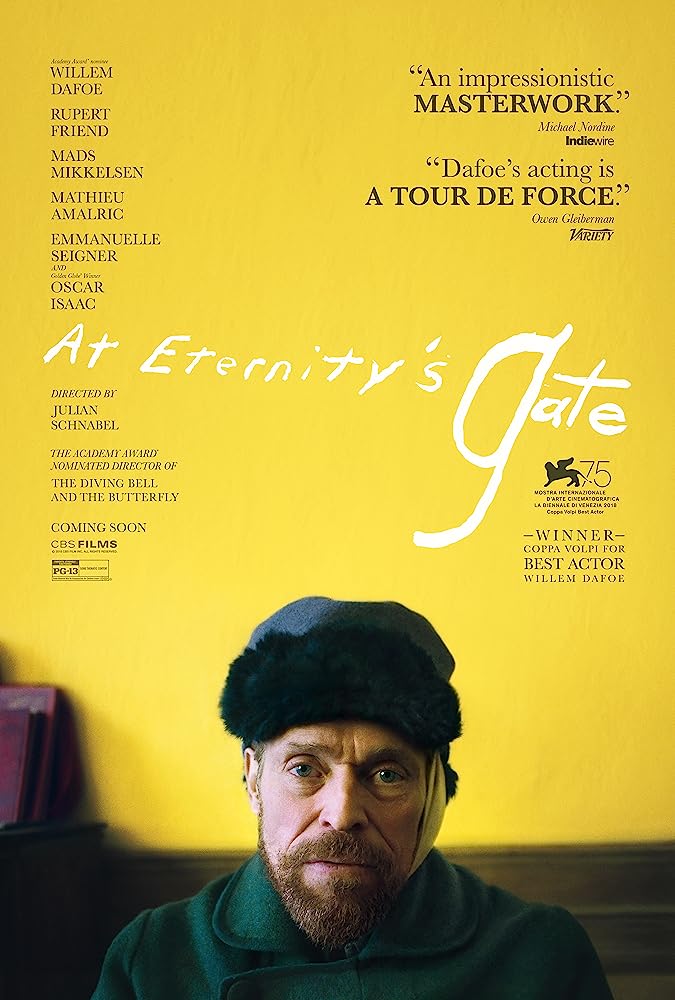