A STRANGER AMONG US (aka: CLOSE TO EDEN)

“I was deeply disappointed that the film ended up seeming too much like a promo for the conservative religion it espoused.“

Sidney Lumet (“Fail-Safe”/”The Hill”/”Prince of the City”)seemingly is the perfect director for a Hasidic undercover cop story, unfortunately he destroys his initial good work with an absurd conclusion that maybe the Devil made him do. It starts out great painting an atmospheric rosy and warm picture of the ultra-Orthodox Jewish sect, who are glowingly praised for their caring God-fearing community. Though, I must say, it sadly ignores how their patriarchal community treats women as second-class citizens.WriterRobert J. Avrech blends in a preposterous murder story with the extremely pious Hasidic community serving as a clash of culture counterpart to the cop WASP story. Things bode well until the drama unravels under a series of miscalculations by Lumet. It’s a shame because I really wanted to like this pic and was fully absorbed until the wheels came off with a ridiculous romance, an overreaching portrait of the Hasadic community and an unneeded action-packed finale

Gung-ho workaholic lonely WASP Brooklyn detective Emily Eden (Melanie Griffith) and her partner Nick (Jamey Sheridan) while outside a movie theater, pad down two perps and Nick gets stuck with a blade. Emily kills the fleeing perp who wielded the knife and arrests the other. Internal Affairs investigates for excessive force and clears her for duty. Her precinct boss assigns the antsy lady, looking for action after her forced vacation, to the Hasidic community in Brooklyn’s Park Slope to investigate the case of a young Hasidic diamond dealer, Yaakov Klausman (Jake Weber), missing for two days. Emily finds him dead in the ceiling of the office where he works in Manhattan. Convinced it’s an inside job, Emily talks her precinct captain and the Hasidic Rebbe (Lee Richardson) to let her go undercover in the community to catch the thief who stole $750,000 worth in diamonds. This requires her to get a more modest wardrobe and change her hair color to a tamer one. Emily stays with the Rebbe’s sweet adopted daughter Leah (Mia Sara), and her brilliant Talmudic scholar brother Ariel(Eric Thal)takes her around the community. Detective Levine (John Pankow), a cynical worldly Jew, is assigned as her outside back-up partner.While she’s planted inside the vic’s jewelry story, two mobsters (James Gandolfini&Chris Latta) shake down the place for protection money. Setting a police trap, they apprehend the thugs. When they flee, they are gunned down in the street. But before dying insist they didn’t kill the kid.

In the last thirty minutes Lumet couldn’t resist turning what could have still been a decent film into just another disposable Hollywood exploitation movie. For some strange reason, he has Emily falling in love with Ariel by putting some moves on the unworldly kid even though the pious one is soon to wed a rebbe’s daughter from France he never met in an arranged marriage. If that would-be romance between macho cop and gentle scholar wasn’t outlandish and demeaning enough, Yaakov’s killer turns out to be someone he knew intimately. The revolting action-packed conclusion ruins whatever good Lumet previously accomplished and spoils a tremendous Melanie Griffith performance–convincing as a tough as nails, street-wise cop who is vulnerable for real love and realizes for the first time through her Hasidic experience she has a spiritual side that needs to be fulfilled. After all, her last name is Eden.

Lumet breaks every rule about good film-making and gives in to his sometimes bad impulses to make the dramatics implausible, leaving us sated only with one-sided depictions of the colorful Hasidim in prayer, study, ritual and dance. I was deeply disappointed that the film ended up seeming too much like a promo for the conservative religion it espoused, as it put to flames everything else attempted. 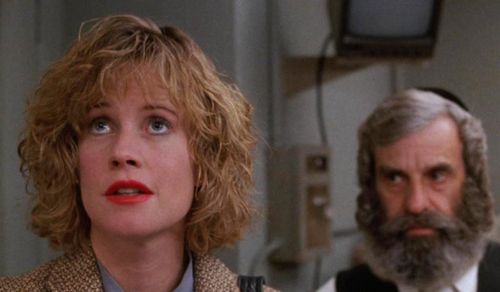