Lively musical satire on Elvis’ 1958 army induction. It’s made by squares with a cornball sense of humor, who spoof the American pop culture and its preoccupation with idolizing celebs; but it’s only sit-com lite.

It’s based on the long-running hit 1960 Broadway play by Michael Stewart and is written by Irving Brecher. Director George Sidney (“Pal Joey”/”Anchors Aweigh”/”Show Boat”) does a good job keeping it energetic, breezy and fun-filled. Unfortunately, he also keeps it witless. The film’s surprise is the brilliant casting of the 22-year-old Ann-Margret to play the ditzy sparkplug 16-year-old heroine, Kim McAfee, a part which paves the way for her future stardom. The film was released shortly before the assassination of President John F. Kennedy, and with that tragic historical moment the American innocence projected here would disappear forever in a divided country heading down a long road of war protests and civil rights unrest.

The silly plot is about the Elvis type of gyrating rocker, Conrad Birdie (Jesse Pearson), drafted into the army and his girl fans hysterically protesting via song. Taking advantage of this situation is the ambitious secretary, Rosie DeLeon (Janet Leigh), for struggling song writer Albert F. Peterson (Dick Van Dyke), who persuades Ed Sullivan as a publicity stunt that during Birdie’s farewell performance on The Ed Sullivan Show he lavish a final goodbye kiss to Kim McAfee, a member of his fan club from Sweet Apple, Ohio. The kiss is meant to be a ‘symbolic kiss’ to all his girl fans, and is to take place in Sweet Apple. Also, Rosie convinces Mr. Sullivan to allow Birdie to sing a song her boyfriend for the last six years, Albert, wrote. Albert’s a bio-chemist, whose domineering mother (Maureen Stapleton), a former vaudeville performer, wants him in showbiz even though he would probably earn a good living as a bio-chemist. Mom also interferes with sonny boy’s relationship with Rosie, and the plucky secretary hopes that the song will give him enough royalties so her momma’s boy boyfriend will have enough guts to cut his mother’s apron strings and marry her.

The rocker is clearly a parody of Elvis, and Birdie’s first name is lifted from another twisting rocker named Conway Twitty. The only problem is that the parody didn’t make sense, since Elvis had a rep of being a good guy and you got me what it had to do with Twitty.

Dick Van Dyke and Paul Lynde reprise the roles they had on stage. Lynde nearly steals the pic as Kim’s irritable father, worrying about how the kiss might aversely affect his local fertilizer business. While singer Bobby Rydell replaces Michael J. Pollard from the stage show, as Kim’s jealous hometown boyfriend Hugo, and makes good use of his pleasant singing voice.

You might think better of it if you can get over that the film comes with no message, unlike the play, and that it sort of works just as a rousing entertainment spectacle. The songs include the following: “Bye Bye Birdie,” “Honestly Sincere,” “How Lovely to Be a Woman,” “Hymn for a Sunday Evening,” “Kids,” “One Boy,” “One Last Kiss,” “The Telephone Hour,” “Got a Lot of Livin’ to Do,” “The Shriners’ Ballet,” “Rosie,” “The Telephone Hour,” “We Love You, Conrad,” and “Put On a Happy Face.”

Ann-Margret originally signed on to sing two songs gets to sing five, as Leigh’s load is lightened by Sidney and she becomes a supporting character while Ann-Margret’s part is enlarged as she becomes the star–something the older Leigh was not pleased about. 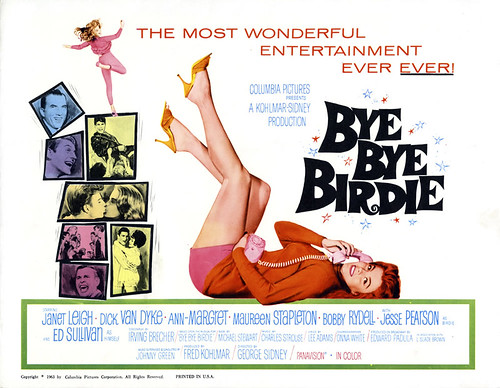