“The two stars were not right for the parts.”

Former actress and first-time director Toni Kalem’s quirky romantic drama is based on an Anne Tyler novel. It’s set in the small North Carolina town of Fuquay-Varina. Hot looking local gas station attendant Drumstrings Casey (Guy Pearce) is a wannabe rock singer. Plain-looking, introverted loner Evie Decker (Lili Taylor) lives a sheltered life as a virgin with her melancholy widowed father (Tom Bower) in a big old house and has a job she hates as a bunny costumed hot dog vendor at Kiddie Acres amusement park, where she has to put up with the obnoxious manager who at one point in his job duties asks “How are your buns?” She spends quiet evenings listening to a rock station, and becomes smitten when she hears Drumstrings Casey’s sleepy song that evokes the same thoughts she has about escaping this dreary existence. While attending the roadhouse where Casey has a gig, with her overweight but bouncy beauty parlor worker best friend Violet (Sara Rue), she carves her heartthrob’s last name with a broken glass piece into her forehead—but backward since she was looking at the bathroom mirror.

Evie’s act of self-mutilation (which she puts a positive spin on it as a means of self-empowerment) leads to Casey meeting her and soon marrying her, as they both crave emotional support for their respective dreams–stable homemaker and star performer. Evie becomes pregnant and evolves as a housewife while he loses his ambition to make it as a rocker and becomes aimless, as their marriage hits a temporary dry spell.

The film goes through a by now familiar tribute to Southern Gothic humor as we have Evie’s sassy black maid Clotelia (Irma P. Hall) rip into the timid girl at will with weary common-sense sayings, while Shawnee Smith (Faye-Jean Lindsay) is the trashy blonde slut who hangs around the rock scene. Drumstrings’s trademark free-association babbling onstage remind one of how pathetic Jim Morrison became at the twilight of his career and here is used to hypnotize the childish Evie and put her under his spell. The trouble with everything is that none of it seemed convincing, the two stars were not right for the parts (mentality they were too mature for parts that called for teens) and the arc of the dramatics could never get past being either ill-conceived, trite or arbitrary. Though the stars are serious about making this a film about soul-mates understanding one another, their characterizations never gave the impression that all the dramatics was anything more than plot devices foisted upon them by the author.

Most of Pearce’s tunes are by Joe Henry. 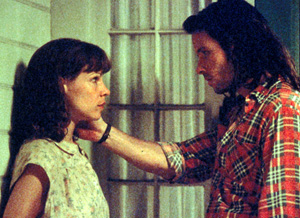