The 34-year-old prolific documentary director Matthew Heineman (“City of Ghosts”/”Cartel Land”), known for films made in danger zones, makes his feature debut with this engaging real-life war drama. It’s on the renown brave war correspondent Marie Colvin (Rosamund Pike, British actress), known for wearing her trademark eyepatch after losing the sight in one eye due to a Sri Lankan army explosive (RPG) in Sri Lanka, in 2001, who was killed while covering the siege of Homs in Syria in 2012.Heineman bases it on Marie Brenner’s Vanity Fair article about the adventures of the real-life Colvin, based in London. After hearing Colvin ask “Does our war coverage really make a difference?”, as he takes her POV that the reasons for war matter far less in covering the war than in finding the right human-interest angle to interest readers back home. It begins with the shocking overhead shots of a bombed-out Homs in 2012, with a voiceover of the real Long Island-bred war correspondent Colvin, for the Sunday Times, in her own voice, being interviewed about why she does what she does. Colvin is depicted as a hard-headed, courageous, chain-smoking, vodka-swilling, and salty old-school Fourth-Estater. She’s a binge-drinker and freely fucks strangers in foreign-locales while on assignment, and has many colorful tangles over her war coverage with her capable editor Sean Ryan (Tom Hollander) and nicely jells with her dedicated photographer Paul Conroy (Jamie Dornan). A despondent Colvin, possibly suffering from PTSD, is traumatized by having seen so much loss over the years. Her glum mood prevails over the narrative. In a minor role, Stanley Tucci pops up as Colvin’s boyfriend.Colvin’s obsession to get the most dangerous, exciting story she can, only compounds her ongoing trauma. Unfortunately the film is heavy-handed and uses too many of the safe clichés of war being hell and like a drug, to seem fresh. Also the banal dialogue keeps us from getting to know the genuine heroine any better than how we knew her from before. In a movie that mixes fiction with fact, it seems mostly an unnecessary brow-beating anti-war lecture-101 delivered on the brutalities of war–a lecture that didn’t do justice to its subject’s unusual story. Colvin’s biopic seems to be reduced to a few bloody incidents in the wars she covered, such as those incidents noted above and the firefight in Libya , the exhuming of a mass grave of Kuwait POWs in Iraq, and the eyewitness reporting of the hostilities from Marjah in Afghanistan. Pike nails her role, and should be up for a Best Actress award at Oscar time. 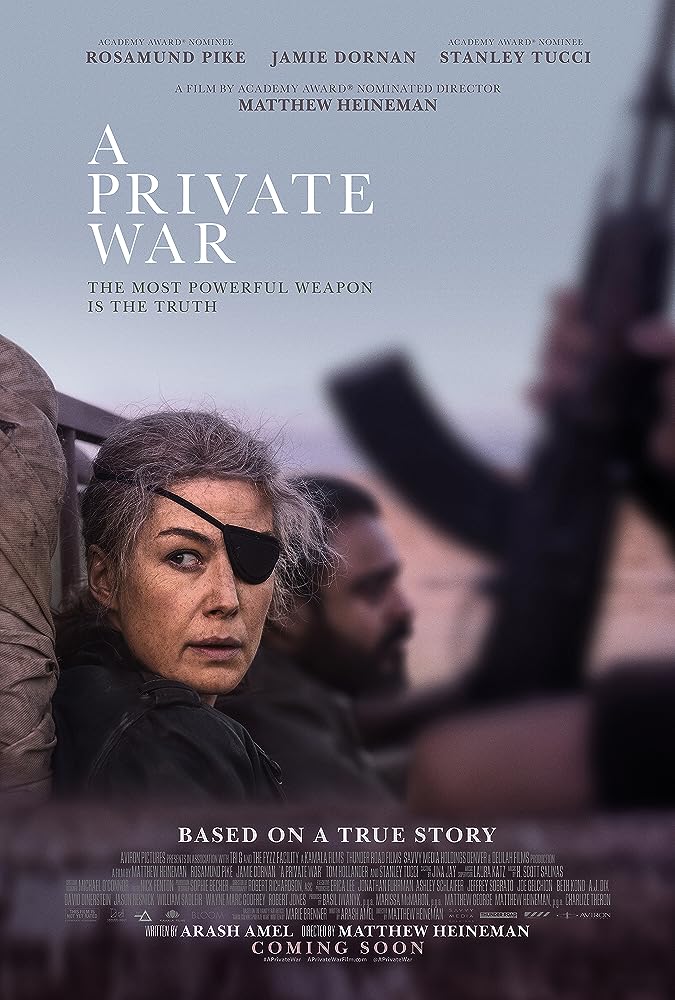