A tepid and schmaltzy patriotic fluff musical. It’s best known today as a second-rate forerunner for the superb On the Town (1949), but it was a popular hit during its theater release. Director George Sidney(“Pal Joey”/”The Harvey Girls”/”Kiss Me Kate”) leans on the fast talking Gene Kelly’s charm as a brash ladies man and Frank Sinatra’s school boy appeal as Kelly’s innocent pupil in learning how to pickup chicks to overcome the weak story line and the likable thesps almost pull it off. The film’s best moments have Frank singing “I Fall in Love Too Easily” and “What Makes the Sunset?”, two of five songs Jule Styne and Sammy Cahn wrote especially for the pic. The film’s highlight has Kelly hoofing with the mouse Jerry, from the Tom and Jerry cartoon. The pic is based on an idea by Natalie Marcin and is written by Isobel Lennart. The female star, Kathryn Grayson chips in singing “Jalousie” and “All Of a Sudden My Heart Sings.” While guest star Jose Iturbi contributes by conducting a Tchaikovsky concerto and by playing on the piano a boogie-woogie version of “The Donkey Serenade.”

Shy Brooklyn native Clarence Doolittle (Frank Sinatra) and his best pal, the older more worldly skirt-chaser Joseph Brady (Gene Kelly), are awarded medals for heroism aboard the Knoxville, docked at the San Diego harbor, as Joe saved Clarence’s life when he fell overboard at sea, and both sailors are granted a four-day pass and head to Los Angeles to chase girls. While on shore leave in Hollywood the police bring the sailors down to the police station to help them get the name and address of an obsessed little runaway boy who refuses to give them his name and address and only tells them he wants to join the Navy. The cops shanghai the sailors to the station house and then make them take the feisty kid home after they trick the kid into giving over the necessary info. The sailors discover the cute nine-year-old, Donald (Dean Stockwell), is an orphan and lives with his guardian, the attractive single aunt, Susan Abbott (Katryn Grayson). When the boys discover Susan works as an extra in Hollywood and is an aspiring singer, they make up for their gaffe of sending away a person (Grady Sutton) who would introduce her to Jose Iturbi for an audition by promising to get their so-called friend Iturbi to give her an audition. The conductor had just played Anchors Aweigh for their ship during the medal ceremony, and expressed his love for the Navy and said he would do anything for them. As a reward for getting the audition Susan wants to date Joe, but he’s chasing after an actress and palms her off on Clarence. In the meantime, Clarence feels overwhelmed being with Susan and when he meets a waitress (Pamela Britton), working at the club where Susan works, and she’s also from Brooklyn, he finds it easy to talk to her and falls in love. Joe at this time realizes he really loves Susan, but is too afraid to tell her this. But things neatly fall in place when Clarence bows out of the Susan picture and Joe moves in, and Iturbi connects with Susan when she tells him what happened and hires her for a singing gig immediately.

It’s all mindlessly entertaining and as pleasant as whistling at a dame, and guaranteed not to get you sea sick or your faced slapped. 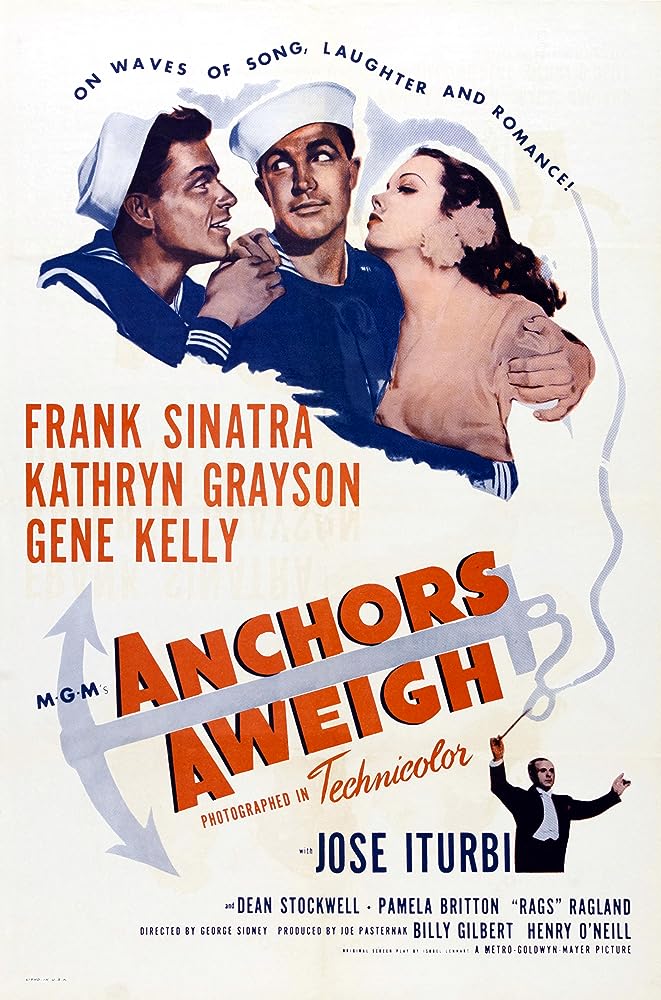 END OF THE AFFAIR, THE