“Playfully suggests what life was like for white teenagers in small-town America during the 1950s and early 1960s.”

George Lucas (“Star Wars: Episode IV – A New Hope“/”Star Wars: Episode I – The Phantom Menace“/”Star Wars: Episode II – Attack of the Clones“)shoots this low-budget rock ‘n’ roll film at $750,000, in 28 days, that was shot in the small Northern California towns of San Rafael and Petaluma. It became an acclaimed sleeper hit in 1973 and as a result of its success had many imitators. The time capsule film had a cast of unknowns, many of whom went on to great careers. This was before Lucas made his indelible mark in cinema history in the Star Wars series. American Graffiti playfully suggests what life was like for white teenagers in small-town America during the 1950s and early 1960s.Lucas co-writes this perceptive and lively coming of age classic film with Gloria Katz and Willard Huyck. Despite many plot contrivances and a few awkward scenes, the teen pic is an entertaining nostalgia piece that comes with renown disc jockey of the time, Wolfman Jack, doing his familiar radio bit and spinning out a non-stop soundtrack of 41 legendary Golden Oldies that include At the Hop, Rock Around the Clock, Why do Fools Fall in Love?, Book of Love, The Great Pretender, Johnny B. Goode, Get a Job, Sixteen Candles, Little Darlin, Teen Angel and many more songs.

It focuses on a single night in the summer of 1962, in Modesto, California (Lucas’s hometown), the region known as the Valley, where teenagers hang-out at Mel’s fast food drive-in and are served by carhops on roller skates, cruise the main street in souped-up cars while showing off or trying to score dates with the opposite sex or looking to drag race.

Recent nice guy high school grads Curt Henderson (Richard Dreyfuss) and Steve Bolander (Ron Howard) are going East to college in the morning, but Moose Lodge brainy scholarship winner Curt has second thoughts about leaving the small town while Steve breaks up with his long-time steady Laurie (Cindy Williams), Curt’s sister, because he wants to date college girls while on the other coast. The town’s 22-year-old legendary cool dude drag racing champ John Milner (Paul Le Mat), driving a souped-up 1932 yellow Ford coupe, finds he’s stuck riding around with the bratty but vulnerable thirteen year old girl, Carol (Mackenzie Phillips), and can’t dump the talkative girl as he explains her embarrassing presence to his followers by saying she’s his cousin he’s babysitting. Meanwhile the unattached Curt becomes obsessed for the night in finding the beautiful mysterious blonde riding a white T-bird, who mouths “I love you” towards him before taking off, and with surviving his adventure when kidnapped by the ruffian Pharaohs and put through a gang initiation by the leader named Joe (Bo Hopkins). Nerdy loser Terry “The Toad” Fields (Martin Smith) is elated that Steve will let him use his car while he’s away at college and surprisingly picks up Debbie (Candy Clark) because she’s pleased when he tells her she looks like Connie Stevens. The long night leads to the drag race between challenger Bob Falfa (Harrison Ford) in a souped-up 1955 Chevrolet and John, Curt’s change of plans and the reuniting of Steve and Laurie after their difficult night apart. 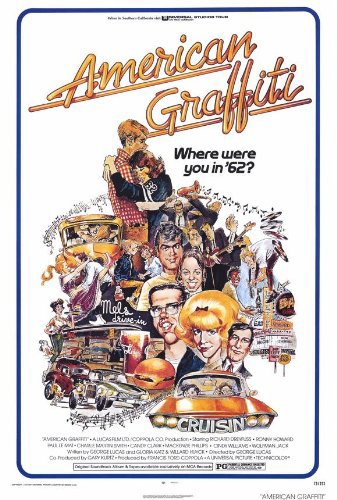