“A strong topical dramatic film that presents the complexities of everyday life for stressed-out fishermen.“

A strong topical dramatic film that presents the complexities of everyday life for stressed-out fishermen. Louis Malle (“Atlantic City”/”Pretty Baby”/”Viva Maria!”) helms an intelligent, poignant and stirring drama that explores American racism, the conflict over immigration due to economic pressures, America’s love affair with guns, and the wide cultural gap with the Vietnamese refugees. Brilliantly zeroing on the problems that divide a group of redneck fisherman and competing over-polite Vietnamese fisherman in the Gulf of Galveston in Texas, who are held responsible for taking food away from their families. Alice Arlen’s screenplay is blunt and leaves no doubt whose side the filmmaker favors as she sets up the story so that all the American fishermen are swines while all the Vietnamese are sweetie pies, just following the American Dream. The film is based on selective true incidents that happened from 1979 to 1981, as after the fall of Saigon in 1975 over a half a million Vietnamese became refugees in America and as many as 75,000 settled in the ports along the Gulf of Mexico in Texas. This is a fictionalized story that shows how racism reared its ugly head, and it frames its story around a failed romance between two local Anglos played with burning passion by Amy Madigan and Ed Harris–a real-life couple.

The film opens with affable and optimistic Vietnamese refugee Dinh (Ho Nguyen), who speaks a perfect English, hitchhiking into Port Alamo, a Texas port town in Galveston Bay, and is picked up by Vietnam vet truck driver (Gary Basaraba). He will prove to be one of the few in town who don’t hate the refugees. The sympathetic driver tells his rider his impression of Vietnam is ‘good-looking women, dynamite drugs!’ The hard working Dinh stays with a community of Vietnam refugees who fish in their own boats and sell their catch to the fair-minded Texas coast shrimp supplier Wally (Donald Moffat), but who have infuriated the local Anglo fisherman because the gulf is being over-grazed and the price of shrimp has drastically fallen. The locals ban together and blame their economic problems on the refugee shrimpers and on Wally for dealing with them. Wally’s unmarried headstrong young daughter Glory (Amy Madigan) has just returned from Corpus Cristi to help her ailing father run the business. Glory’s boyfriend from high school is the racist and unreflective Shang Pierce (Ed Harris), a Vietnam vet and hotheaded local shrimper who has a loan out on a boat that he can’t pay off and is in danger of losing it to the bank. He’s also locked into an unhappy marriage with his ill-humored wife (Cynthia Carle), and has three kids. Immediately upon Glory’s return to town they start sleeping together. They soon find themselves on a collision course when Glory can’t help Shang out with money to save his boat because she previously loaned money to her strapped father to save the business; he therefore changes his mind to ditch his wife for her. Tension between the local shrimpers intensifies when the KKK is brought in, as a smooth-talking Klan organizer (William Frankfather) works the white boys over by telling them history is on their side. Shang, a born leader and independent thinker, decides after losing his boat to join the effort to declare war on the refugees. After intimidating the entire Vietnamese community to leave with a cross burning and using the threat of guns to prevent them from fishing, only Dinh remains behind. He tells Glory he refuses to be run out of town, saying something Gary Cooper would say in a Western. When Wally has a heart attack and is hospitalized, it looks like the business is going under. But Dinh rents out a boat from Glory and goes shrimping with the only other refugee who remained behind (Truyer V Tran). It leads to a violent conclusion, with all parties suffering in the end.

It’s a trying social consciousness film that sets off sparks as it shows why the refugees are hated, making as strong a case for the Anglo fisherman as the refugees but showing they are both in a bind if they can’t at least talk together about their problems. When things get violent and intolerance overrides the laws of the land, there can be no doubt that the refugee victims have gained the moral high ground and won the argument. What makes this film special is the sizzling performances by Madigan and Harris, who breath fire into every scene where they are on the screen. It’s an overlooked film that received only mixed reviews, but one I found right on the money and don’t share the same opinion of the critics who somehow found it superficial, uninvolving and clumsily made. 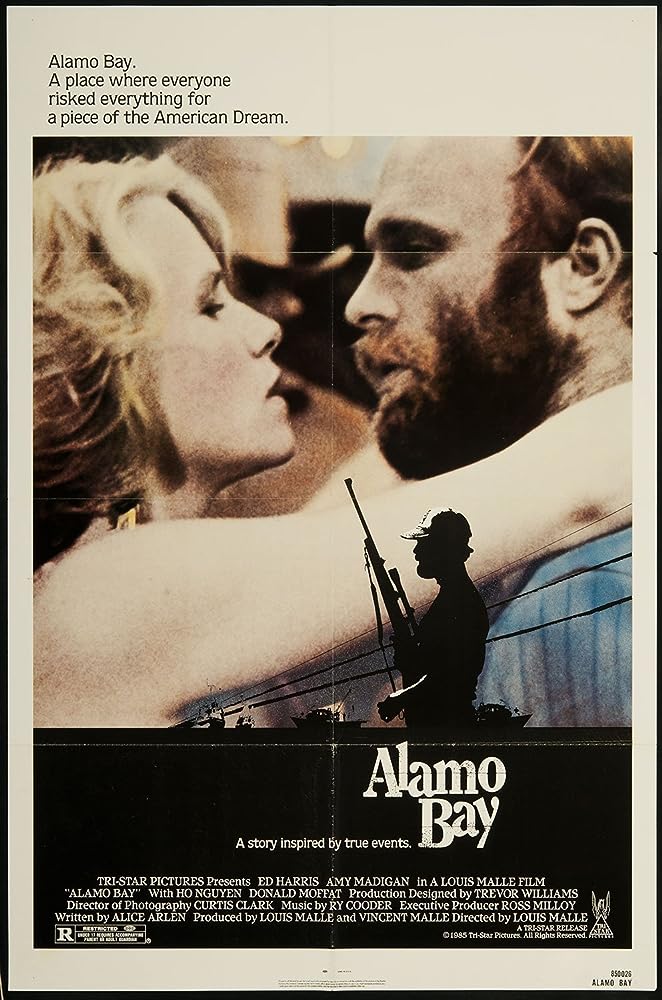