“A much ballyhooed film that has been overrated as a classic.“

A much ballyhooed film that has been overrated as a classic, though it remains very entertaining. Its main asset is a boorish Humphrey Bogart paired with the prim spinster Katharine Hepburn, opposites who in a strangely amusing way find romance during a time of strife. For Bogart’s hammy performance, he collected an Oscar.

Charlie Allnut (Bogart) is a cussing, unshaven, and boozing Canadian tramp steamer captain, who on occasions when he’s not trading on the river delivers mail to brother and sister English missionaries, Rose (Hepburn) and Samuel Sayer (Morley), in 1914 German East Africa at the onset of WW1. When the Germans destroy their village Samuel dies from his injuries, leaving her isolated and in danger. Charlie offers Rose a lift back to civilization.

The bulk of the film is about their arduous journey down the Ulonga-Bora river, as it’s played as a comedy between two such incompatibles falling for each other. At first they are formerly polite, later quarrelsome as Rose has had it with his drunkenness and spills the booze overboard. She’s further miffed that he won’t use their explosives to blow up the mighty German gunboat, the Louisa, which he considers to be a fool’s mission. He tries to dissuade her by taking her over the dangerous rapids, but that strategy backfires as she gets all thrilled by the roller-coaster ride and massages his ego by telling him how skilled a captain he is.

They make it past a German fort blocking the river, survive swarms of flies and leeches, and experience some more hardships before finally nearing the Louisa. But before they can execute their bold plan to torpedo the gunship, they are captured and sentenced to death. Charlie asks the captain to marry them before the execution and he instantly obliges. But as they are about to be hung, the torpedo Charlie loaded onto the African Queen hits the Louisa. Fortunately, the married couple finds safety ashore.

African Queen comes armed with a spirited script by James Agee, which he adapted from the 1935 novel by C.S. Forester. It’s pretty to look at because cinematographer Jack Cardiff does a fine job catching the flavor of the locale (filmed at the Belgian Congo and British Uganda). But the story is so contrived and unbelievable, that it’s solely through the great chemistry released by the two middle-aged stars that gets this pic through the jungle and into a better light. Director and co-screenwriter John Huston’s helmsman-ship is questionable, as he steered the film down too many slippery slopes. 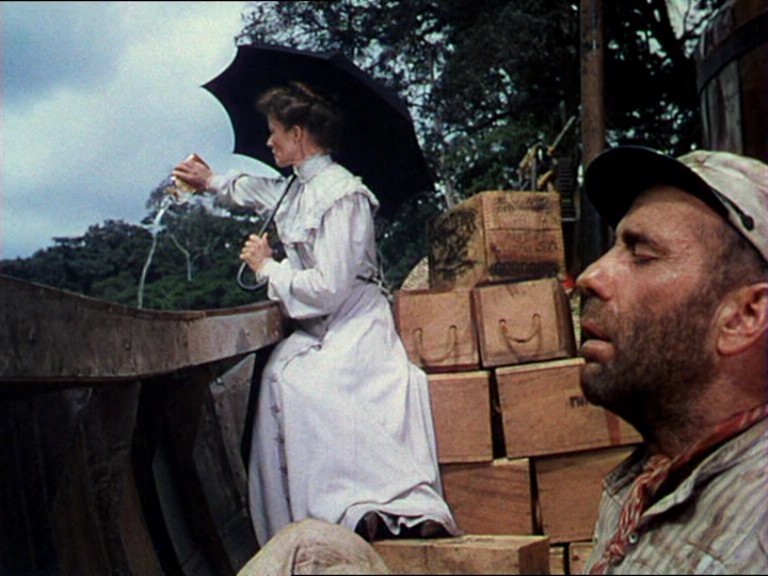