À DOUBLE TOUR (aka: LEDA) (aka: WEB OF PASSION)

“An early sample of a French New Wave “whodunit” from Claude Chabrol.”

An early sample of a French New Wave “whodunit” from Claude Chabrol (“L’Enfer”/”Les Bonnes Femmes”). This was Chabrol’s third film after “Le Beau Serge” and “Les Cousins,” and his first in Technicolor and his first psychological thriller (a genre he earned his reputation in as an innovator). Chabrol adapts the American Stanley Ellin’s novel “The Key To Nicholas Street” that’s set in the lush surroundings of a vineyard in the rural Aix-en-Provence. The 45-year-old patriarch vintner Henri Marcoux (Jacques Dacqmine) has grown weary of his nagging wife Thérèse (Madeleine Robinson) and has entered into an open affair with his beautiful newly arrived red headed neighbor from Japan, Leda Mortoni (Antonella Lualdi). His pretty daughter Elizabeth is dating Hungarian drifter and free-spirit Laszlo Kovacs (Jean-Paul Belmondo), in opposition to her mother but with the blessings of her father. Laszlo knew Leda from Japan and introduced her to Henri. Henri’s son Richard (Andre Jocelyn) is a strange young man who loves classical music, is a voyeur without a girlfriend, a momma’s boy and gives off creepy vibes as someone unbalanced. Julie (Bernadette Lafont) is the sexy live-in maid, whose boyfriend is milkman Roger Tartan (Mario David).

Things get hectic in the Marcoux bourgeois household when Henri opts to leave his wife for the artistic and sensitive Leda, and starts ragging on her for being a pig and a bitch. Thérèse talks her daughter Elizabeth into dumping Laszlo for disrespecting her, even though she has the hots for the wise guy bum. Laszlo goes to the local café and meets his impoverished Hungarian friend Vlado and they get drunk, with Laszlo inviting him to dine with the Marcouxs. While they’re about to dine, Roger sends Julie to Leda’s to get some empty milk bottles. She discovers Leda’s dead body and the police investigate; they suspect the milkman. Meanwhile Henri is devastated, as his whole life comes crashing down over the loss of the love of his life.

The film is visually stunning thanks to the Hakim brother producers who spent freely on the production and the great cinematographer Henri Decaë’s beautiful camera work.

It’s easy to guess who the culprit is, but it’s the telling of the story that matters more.

Madeleine Robinson won the “Best Actress” award at the 1959 Venice Film Festival. This was Belmondo’s last role before becoming an international star because of Godard’s “Breathless.” The other women were sexy and lively, all the men gave adequate performances. It’s not top-flight Chabrol, lacking much emotional connection to the characters, but it’s still solid and there’s much fun ala Hitchcock in playing with the mise en scene and the oedipal conflict. 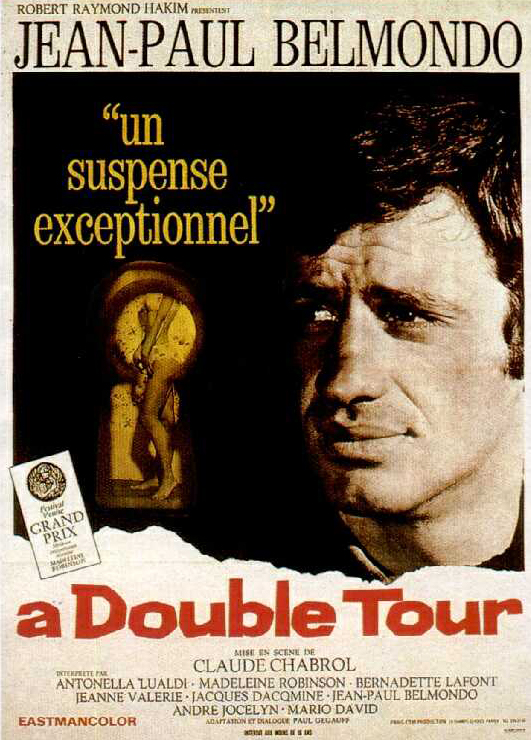