THE ACT OF KILLING

“Haunting true story confessional doc about the mass killings of a million people depicted as communists in the Indonesia of 1965 and 1966.”

The American born and London living filmmaker Joshua Oppenheimer (“The Entire History of the Louisiana Purchase“) gives us a haunting true story confessional doc about the mass killings of a million people depicted as communists in the Indonesia of 1965 and 1966, and shows us the charismatic but unrepentant gangster killers proudly re-enacting their crimes. The film opens with an apt quote from Voltaire — It is forbidden to kill; therefore all murderers are punished unless they kill in large numbers and to the sound of trumpets.Oppenheimer and co-directors Christine Cynn and Anonymous precede to show us the face of evil by having the death squad gangsters who committed the crimes and were not punished act like patriotic heroes, as they are only too glad to reenact the massacres by play-acting them to musical, western, noir and comedy genre Hollywood films that they love.

In the back story we’re told the Indonesian government was overthrown in a military coup in 1965 and that Anwar Congo and Herman Soto, ticket scalpers of movies, and their gangster pals, immediately after the coup acted to abet military death squads and the pro-regime paramilitary Pancasila Youth group by applying brute force at the government’s request to eliminate any opposition (thereby murdering communists, ethnic Chinese and intellectuals). To reassure the public they were doing the right thing, the government labeled all the vics as communists and smeared them in the media with hateful things they never said in order to get the public on their side.

The morally shocking pic is a troublesome watch for any right thinking person and should be for the world community (especially America) that never tried to stop such genocidal executions (at least from what is public knowledge). It’s a controversial pic, but is deserving to be shown internationally as a small chance for belated justice and for the world to know the truth about the coup is at stake. What was downright ugly, especially to all the vics, was how the filmmaker unwisely gave these vile murdering thugs, even though they were now old men, the free rein to openly state they would be willing to murder again and freely reenact their crimes as if it were comical. This showed little respect for all those millions still living in such a politically repressed country and those who died at the hands of such perverted criminals. 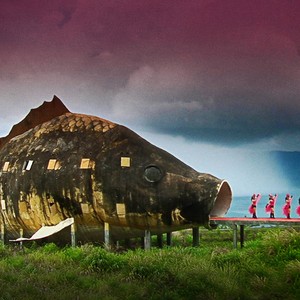