Sydney Pollack (“In The Way We Were”/”Three Days of the Condor”/”The Electric Horseman”) directs a legal drama that takes a close look at irresponsible reporting and comes up finding the media lacking in ethics (What a surprise!). Kurt Luedtke, a former reporter for The Detroit Free Press, turns in a screenplay that won an Oscar. The well-meaning liberal message story has good craftsmanship but can’t deliver on its hard-hitting story without manipulating the viewer. Also Sally Field doesn’t cut it as being believable as an ace reporter for a big city newspaper; she’s more like a shoddy college reporter. It was filmed a year after a reporter for the esteemed Washington Post was discovered to have won a Pulitzer Prize over a fabricated story and had to return the prize. Recently NY Times reporter Judy Miller was used by Bush administration sources to plant misinformation about Saddam Hussein’s arms such as WMD and later went to jail to protect her sources over a story planted by Scooter Libby, an aide to the Vice President, that outed a covert CIA operative. With that in mind, even though the film seemed stilted and flat the topic it raised is still relevant today and it’s good to have this pic since it’s rare that a Hollywood film touches such a controversial topic.

Megan Carter (Sally Field) is an ambitious investigative reporter for the Miami Standard trying desperately to get a lead on the headline story of a local longshoreman labor leader’s disappearance. Elliot Rosen (Bob Balaban), the scheming head of a federal “strike force,” investigating the same disappearance case has come up empty and to save his job tries illegal tactics. He leaks the story to Megan by unethically leaving a file on his desk while he walks out on a meeting with her. The file Megan naturally reads says that Michael Gallagher (Paul Newman), the Florida businessman liquor distributor, the son of a dead bootlegger mobster Tommy Gallagher, is under a federal investigation as a key suspect in the case. Rosen’s thinking is that this will smoke out Michael to make contact with his father’s mobster friends to clear his name. This is a premise I found hard to swallow.

Without checking the story to see if it’s true or corroborating it with another source like they teach in Journalism 101, Megan is pressured by her sleazy editor (Josef Sommer) to go with the story because there’s no chance Gallagher can sue for libel under the Absence of Malice rule for slander. But the slanderous story makes things difficult for the innocent Michael, whose father kept him out of the rackets completely and he has been clean his entire life. It also causes a problem for Michael’s childhood friend Teresa Perrone (Melinda Dillon), a devout Catholic, whom he accompanied to Atlanta to arrange her secret abortion during the time of the disappearance. Teresa is afraid her traditional parochial school and her old-fashioned parents would not understand the abortion, but her dilemma is that she wants to return the favor that Michael did for her since she’s his best alibi.

It gets resolved when the clever Michael, during an informal hearing held by a flashy Department of Justice supervisor named James A. Wells (Wilford Brimley), comes up with a complicated ruse to turn the tables on those who besmirched his good name – the reporter, the rag newspaper, the slimy Rosen and the weak-minded presidential appointed lawman named Quinn (Don Hood).

What the film might lack in dramatics and in a convoluted story it more than makes up for with its weighty subject matter. Because in recent times the corruption of the media and law officials has come to our attention numerous times, one can make a case that they deserved to be skewered even if the dice was loaded against them. 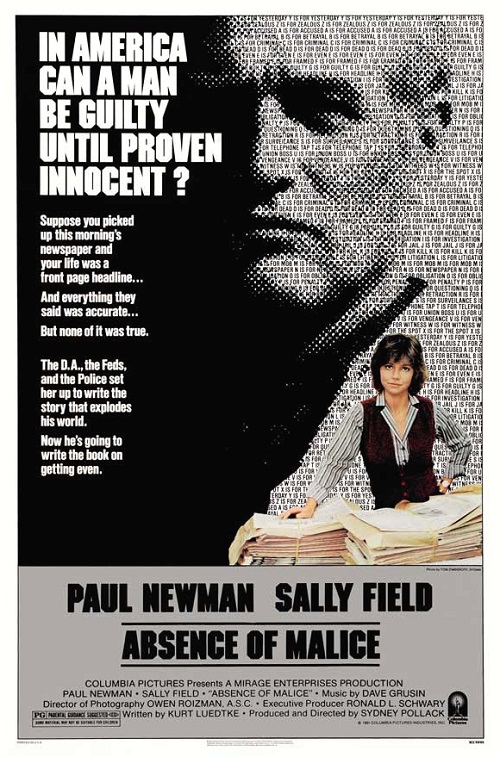