Incredibly stiff adaptation of a Sir Arthur Conan Doyle sci-fi story, that was first made in the superior 1925 silent classic. Director Irwin Allen (“The Swarm”/”Beyond the Poseidon Adventure”/”Voyage to the Bottom of the Sea”) keeps it mediocre and filled with trite dialogue, and offers a destructive conclusion that boggles the mind in how painful it was to watch such a poorly constructed scenario. Writer Charles Bennett keeps the screenplay laborious. All the actors are miscast and give strikingly poor performances, some of the worst in their careers.

Wacky and belligerent zoologist and anthropologist Professor George Edward Challenger (Claude Rains) returns to England from the Amazon with the claim that he discovered live dinosaurs from the pre-historic world. At a London lecture to the doubting Zoological Institute, Challenger offers no proof but demands a new expedition be funded to confirm his findings. The society head, Professor Walter Summerlee (Richard Haydn), Challenger’s main rival, gets sucked into going to the Amazon when the head of Global News Service, Stuart Holmes (John Graham), puts up 100,000 pounds to pay for the expedition as long as playboy explorer and hunter Lord Roxton (Michael Rennie) and a reporter from his newspaper, Ed Malone (David Hedison), also tag along. Challenger puts his foot down by rejecting the presence of the pretty Jenny Holmes (Jill St John), the daughter of Stuart’s and squeeze of Lord Roxton, by saying no women allowed.

The safari reaches a remote trading post on the Amazon where they are greeted by an angry guitar-playing Latino helicopter pilot Gomez (Fernando Lamas) and a creepy foreign accented Costa (Jay Novello), a local diamond hunter who is in charge of supplies. To the party’s dismay, the feisty Jenny, decked out in tight pink pants, is already there with her bland brother, David (Ray Stricklyn), and since they can’t get rid of her they reluctantly agree to take the two uninvited guests along. Soon the safari is trapped on the plateau with no way of contacting the outside world, and must deal with the strange life in the pre-historic world of monsters.

The pic tries to make up for all its dramatic shortcomings with its production values, as it makes the dinosaurs lifelike (unfortunately they are played by lizards that have been photographically enlarged and never seem threatening); for further scares it projects a “giant” spider, which is hardly scary; has a volcanic eruption (that seems like sauce boiling) and, on the plus side, has a gorgeous landscape that is a feast for the eyes with lush vegetation (but the special effects pale when compared with Harry Hoyt’s 1925 film that used ground-breaking stop-motion effects). Since the action sequences are so ineffective and the villains so supercilious, the film fails to ring out with suspense, shock or a sense of true adventure. It seems more like a dull turn in the fun house in a seedy amusement park.

Of note, it was the last screen credit for the illustrious 1933 King Kong chief technician Willis O’Brien, who wasn’t allowed to do much on this film as a technician. The result is a dreary, hamstrung and insufferable updated sci-fi flick that no matter what it does can’t disguise how bad a film it turned out to be. 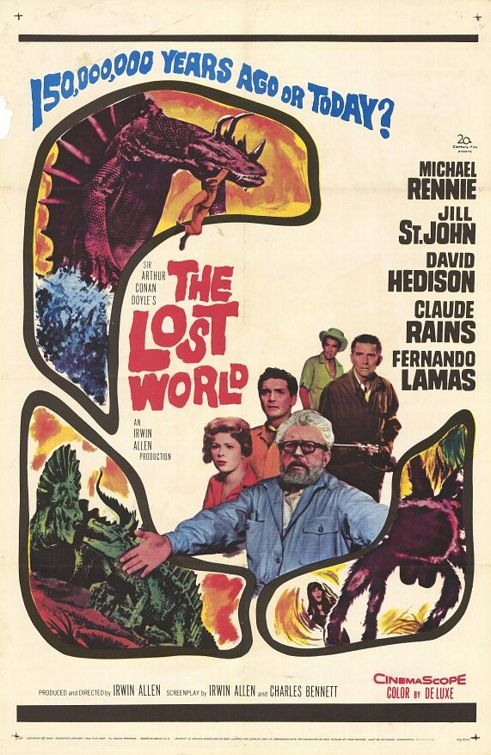