X-MEN: DAYS OF FUTURE PAST

“It’s more enjoyable than the other blockbuster action super-hero films that have been released so far this summer.”

I don’t think it makes too much sense but director Bryan Singer(“Public Access”/”The usual Suspects”/”X-Men”), plagued by an on-going sex scandal in his private life, still delivers a fun pic. Singer delivers the action this Marvel comic book story requires, as it voices favor for those who are different. Its fast pace, good wit, very good acting and cool CGI visuals make it quite enjoyable. It’s more enjoyable than the other blockbuster action super-hero films that have been released so far this summer. Singer brings on a complex time travel story and deftly handles it with panache, while writer Simon Kinberg does justice to the far-out history changing story with his solid screenplay. The pic brings on more mutant characters than one can readily follow if not already a fanboy or a convert to the X-Men franchise. That bodes well for the studio’s DVD release, as those viewers wishing to catch it at their own pace will get a chance at repeated viewings.

It begins in the distant future, with an apocalyptic battle where mutant-killing robots are sent by the American government’s Sentinel program to wipe out all the mutants and their human allies. The robots are created by genius scientist Dr. Trask (Peter Dinklage). He’s the scientist that knows the weaknesses of the mutants, and his coffin-like shaped robots easily defeat the powerful mutants. The peace-loving Prof. Charles Xavier (Patrick Stewart) and his long-time more militant adversary Erik Lehnsherr/Magneto (Ian McKellan), and a few other key figures in the mutant scene try to come up with survival plans while in a Chinese safe house. In their logic, they find their best bet is to have Kitty Pryde (Ellen Page) use her magical powers to transport the consciousness of Logan/Wolverine (Hugh Jackman) back to 1973, when the Vietnam War ended with peace talks in Paris and Nixon (Mark Camacho) was president. The plan is to change the events of that time and thereby to undo Trask’s Nixon approved Sentinel program aimed at eliminating all mutants.

James McAvoy is the young version of Patrick Stewart’s telepathic Professor X and Michael Fassbender is the youthful Ian McKellen’s metal-bending Magneto. It’s up to Wolverine to organize an almost impossible prison break for Magneto, who is being held in a maximum security Pentagon isolation underground glass-sealed cell for his history changing serious crime. In the meantime the shape-shifting Raven/Mystique (Jennifer Lawrence), an anarchist, is a threat to eliminate the mutant expert manufacturer of killer robots and the film’s chief villain Dr. Trask, and thereby make it possible for the mutants to be perceived as the bad guys. Assisting Wolverine in the prison escape is Nicholas Hoult’s Beast and the very fast moving teen Quicksilver (Evan Peters), with the scene-stealing newcomer mutant in the film’s best sequence taking place in the Pentagon kitchen.

Other mutants of note are Halle Berry’s Storm and Shawn Ashmore’s Iceman.

Under the serial’s original director, the reboot still seems fresh and worth seeing. 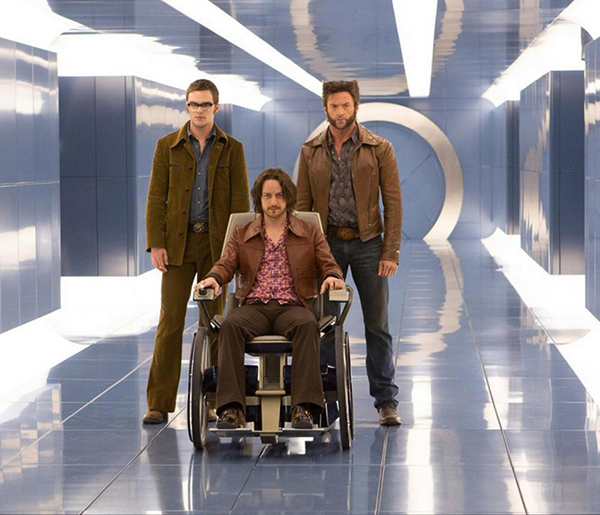 END OF THE AFFAIR, THE

EMPEROR’S NAKED ARMY MARCHES ON, THE