The seventy-something Aussie filmmaker Fred Schepisi(“Plenty”/”Roxanne”/”Last Orders”) assuredly directs this minor film. It’s a crowd-pleasing middle-brow romantic comedy about life in an elite New England prep school, that presents an intellectual war in the form of a debate on the power of the word versus the power of the visual image. Too bad itcan’t completely commit to that culture war theme and instead resorts to the more plebeian problems of its two protagonists: the opinionated, bitter, self-absorbed, divorced, once star English teacher, Jack Marcus (Clive Owens), a once respected published writer, and wonders if he could get over his personal problems, his drinking problem, writer’s block and report to work on time and challenge his students to care about words more than they do about grades and if he can get it together to be once again the great teacher who relates to today’s students. If he can, the reward is that Jack will keep his job and in the climax will kiss the other protagonist. She’s the icy new Italy-born art teacher, Dina Delsanto (Juliette Binoche), a famous abstract painter, who can’t paint any more because of a debilitating case of rheumatoid arthritis and has bitterly left her NYC workplace to slum in the country teaching the preppie crowd.

An animated courtship develops between the two brooding souls trying to overcome their inner demons, who argue with each other just for gamesmanship and then argue for the merits of their teaching subjects over all other expressions of art. Jack is threatened that his contract might not be renewed unless he turns things around, and decides to turn the tired school magazine into the arena for the debate of words over pictures and to save his job have his English Honors class debate Ms. Delsanto’s Art Honors class.

In writerGerald DiPego’s cloying script it’s shown how both teachers are demanding and urge their students to change the world for the better, indicating through its preachy script that it’s such teachers that light the fire under their students and are the star teachers in schools that care more about learning than dishing out prestige.

But the story, featuring a meaningless and contrived debate, is culturally pretentious, toothless and forgettable (it’s also derivative of a Tracy & Hepburn comedy from the 1930s and at times I thought I was watching a diluted form of the Dead Poets’ Society), What rings true is the charming performances by Owens and Binoche. They are good at playing vulnerable, grouchy, smart and cheeky teachers who need to be hugged, and they give the pic its energy by making all the best moves possible considering how tame is the script and how it asks Owens to say such things to Binoche that couldn’t be more sappy, such as: “I can’t tell you how much I want us to put our mouths together.” 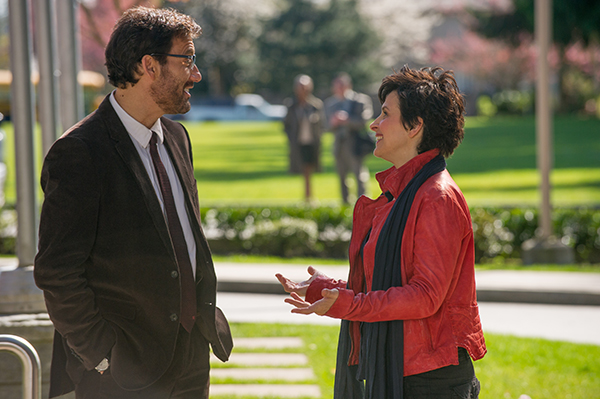