“It’s competently made, but that alone doesn’t make it a good film.”

Writer-director Greg McLean, previously helming commercials and short films, helms this gruesome derivative (basically just another low-budget version of The Texas Chainsaw Massacre but without the wit, just the cruelty) slasher/horror film that has cool scenery but lacks imagination, a requisite payoff and entertainment value (unless you consider John Jarratt’s performance as a madman slasher your idea of entertainment). It’s based on a true story about three party-animal friends–two twentysomething British women visitors Liz (Cassandra Magrath) and Kristy (Kestie Morassi), and the local youth from Sydney, Ben (Nathan Phillips). They hook up for an aimless backpacking road trip across the beautiful but inhospitable Australian outback. They booze it up, take in the gorgeous sunsets and the local sights until their luck runs out after visiting Wolf Creek to climb a mountain and view a meteor crater, as their car won’t start when they return from their hike. A seemingly friendly bushman, good ol’ boy (John Jarratt), with quite a chortle, pops up at night and offers to fix their car for free. They get towed in his salvage truck and go along with this colorful Crocodile Dundee type to a far-off campsite, where these not-to-be-mistaken-for-Einsteins soon learn they have been taken to a desolate spot by a psychopathic serial killer. For those who like such things as watching others get tortured, you can get your jollies watching the bushman work the three over and the whole point is to see if they can escape from this butcher who is armed with a long sharp hunting knife, a high-powered rifle, all sorts of tools and backed up by a ferocious Rottweiler.

It’s competently made, but that alone doesn’t make it a good film. 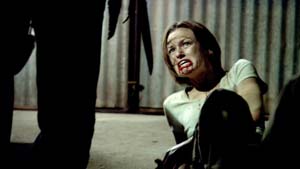 LEGEND OF TOM DOOLEY, THE

LAW OF THE BADLANDS