WIND THAT SHAKES THE BARLEY, THE

The title is also the name of an Irish folk song significantly played early on in the film. This gripping old-fashioned political drama is directed with clarity and passion for the guerrilla fighters by the 70-year-old British filmmaker of renown, Ken Loach (“Kes”/”Family Life”/”Land And Freedom”). This bloody history lesson about the Irish War of Independence won the Palme d’Or at the 2006 Cannes Film Festival. Loach when receiving the award said: “Maybe if we tell the truth about the past, we tell the truth about the present.” It’s solidly written by Paul Laverty, the director’s longtime collaborator, without humor and in a no-nonsense sobering manner, as he clearly lays down the details of the political unrest between the British occupying government and the harassed occupied citizens of Ireland just after WWI. The controversial director was accused of being partial to the freedom fighters and some went as far as accusing him of everything from treason to having made a recruiting film for the Irish Republican Army.

It’s set in occupied County Cork, Ireland circa 1920. After a rugged hurling match the Irish players are accosted on their way home by a bullying platoon of the “Black and Tans,” the occupying soldiers sent from England to put a lid on the growing movement for Irish independence. This incident takes place six years after the Defence of the Realm Act banned “public meetings,” as they were considered a threat to British national security. When the soldiers demanded the lads names and made them strip, one (Laurence Barry)refuses to say his name in English and instead says it in Gaelic. For this act of defiance, he is beaten to death. His family and friends bury him, and sing to honor his memory ‘The Wind That Shakes the Barley.’

This incident and a later incident at a railroad station where British soldiers savagely beat railroad workers who refuse to transport British arms, sets the tone for what follows. The now radicalized medical student named Damien O’Donovan (Cillian Murphy), who was before these two incidents unprepared to join the IRA, resolves to leave on hold his London internship and instead fight in Ireland for a cause he believes is best for the Ireland he loves. He joins his older brother Teddy (Padraic Delaney), who leads a local volunteer detachment fighting a guerrilla war in support for the Irish separatist party Sinn Fein. They won the election in 1918, but were not allowed to serve by the British. After 800 years of English rule, these freedom fighters aim to kick out the 10,000 British soldiers stationed in their country by bold guerrilla tactics.

The idealistic struggle, after much bloodshed, brings the Brits to their breaking point and both sides finally agree in 1921 to a peace treaty that establishes the Irish Free State. But this treaty is not accepted by most of the IRA, as they demand complete freedom, not satisfied that their beloved Ireland is partitioned—the Southern part is a free republic but the unionist North is still under English rule. This divide over the treaty splits families down the middle and causes renewed fighting in the form of a civil war. It also tragically pits the now more radicalized Damien against his older and more pragmatic brother Teddy, who accepted the treaty and is now a soldier in the “Black and Tans.”

It plays out as a thinking man’s anti-war movie that begs comparison to America’s recent occupation woes in the Iraqi War. The filmmaker seemingly decries that political efforts failed to gain a peace, and following the 1921 Anglo-Irish treaty there were some seventy more years of horrible bloodshed until some kind of peace accord was reached. It makes one riled up and saddened that politicians from both sides couldn’t find a way to secure a peace before all the bloodshed was spilled. The overreaction to the film by some indicates that Ireland is still a volatile subject among Brits. There are few political dramas that are so lucid in explaining the seeds of terrorism, the conflict between moderates and extremists, the traps of occupation and how the powerful abusively treat the powerless. I never saw it for a moment as a rallying call for guerrilla fighting or a condemnation of the British imperialist empire—even though the filmmaker leaves no doubt who are the villains. What I saw was a call for reasonable people to provide reasonable solutions (violent solutions only bring on more violence), instead of having the mostly young men of the lower classes on both sides shed their lives in such an unreasonable way for those who place political interest over human interest. 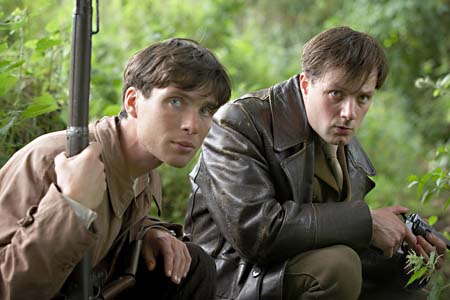 DIARY OF A TEENAGE GIRL, THE