“A noisy satire that had no bite.”

A noisy satire that had no bite about Russia’s modern-day moral decline and fiscal bankruptcy. It’s more noisy than funny or perceptive, and its story is incoherent while its blatant message is more bankrupt than the Russian economy. It has a fantasy plot that is poorly accomplished. It belabors its point to contrast Paris as a place of ideal beauty and freedom while St. Petersburg is viewed as ugly and repressed. It assumes someone would have to be either daffy or a sentimental fool to want to live in Russia over France. The major difference between the two opposite countries relates to a matter of wealth — in France you have the money to buy the latest in electronic equipment, cars, clothes, a variety of fresh foods, proper medicines and all other material goods; while in Russia people are just barely surviving in their corruptly run government with no choices in consumer goods and the men are so crude they piss in the streets and the women throw their garbage out the window. The facile explanation why France is so far ahead is given by an envious Russian: “We held off the Mongol hordes for them, so they had the luxury of developing.”

The central character is the free-spirited Nikoli (Sergei Dontsov), who is a music teacher in a business school for adolescents and is something of a Pied Piper to his impressionable students who trust him over the other bureaucratic staff members. He feels fortunate due to the housing shortage in St. Petersburg to get his own garret room in a communal apartment, where he shares the facilities with a boisterous and vulgar family (meant as archetypes for those who survived communism) that despite their unsophisticated ways are capable of acting kindly. The family spokesperson is the jolly Gorokhov (Viktor Mikhajlov), who along with his extended family of factory workers regularly get drunk and perform as street musicians. As part of the comedy routine there’s his bickering peasant wife Vera (Nina Usatova), who is not pleased with his escapades and the way he treats her without respect. One night the commune is visited by the ghost of the dead old woman who resided there as she has come back looking for her cat (the cat is used as a symbol for curiosity–as everything in this clumsy film is a symbol). In their search for how the cat entered the house, the men discover a portal leading to somewhere unknown and when they drunkenly step through a mirror in the wardrobe closet of the old woman’s room, they magically travel from St. Petersburg to Paris and immediately find a bar where they drink all night and exclaim they never had beer that tasted so good.

When they are sober the next day they realize they were actually in Paris and they soon become daily commuters and try to get in Paris what they can’t get at home. The fired teacher, who is no longer relevant in an educational system that doesn’t value culture but only economics, tries to find a more appreciative audience for his classical music; the Gorokhov family goes after consumer goods — his biggest catch is a Citroën French car, and all the communal travelers look upon Paris as a consumer’s paradise and a land of opportunity.

There is also a subplot involving a high-class French neighbor, Nicole (Agnès Soral), who is an artisan making a luxury item, stuffed animals, for the wealthy, and doesn’t appreciate the noisy Russians moving across her mod Parisian apartment. When she complains too much she gets trapped by Gorokhov into a frightening visit to impoverished Russia. She ends up arrested after spending a chilling night trying to get help in the dark and dangerous looking streets of St. Petersburg while dressed in a nightgown. Nikolai comes to her aid, and this brings a romantic interest into the story. Director/writer Yuri Mamin, himself an émigré, also unsuccessfully tries to inject his Russian brand of humor, as Nikolai gets the chowderhead police to believe she’s Edith Piaf and he’s Elvis, as the police are bribed and believe upon releasing their prisoner they will get video equipment. There are many lame sight gags, adventures with organ grinders, the commune selling their many pianos in the streets of Paris and whatnot, as the film tours both cities and continually hammers home its point about life being better in Paris. When Nikolai’s sheep-like students, who are studying to be capitalists, go on strike and demand doughnuts be served in school and that they be allowed to smoke during their recess, Nikolai is brought back as a teacher and bribes the educationally deprived students not to strike by offering them a field trip to Paris. When they enjoy Paris so much and want to stay and are not deterred that they will leave their parents behind, he then delivers a patriotic speech about their duty to their country and thereby shows he’s really an optimist about Russia and as an example will stay and help the country get out of its doldrums by continuing to teach “aesthetics.” That’s the dilemma Russians have, whether it’s worthwhile to stay and repair their motherland or go as émigrés to a Promised Land like France. The film ends when from a stone wall French music is heard and this time Nikolai and his comrades have to work hard to try to break down the wall with their hammers in order to get a better life. The film ends with another heavy-handed metaphor, this time using as an example the “Berlin Wall.” 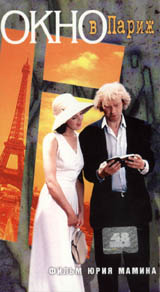 BALLAD OF A SOLDIER