“The film’s excellence rests on the magnificent Oscar-like performance of Glenn Close.”

Swedish director Björn Runge (“Happy End”/”Daybreak”) brilliantly adapts Meg Wolitzer’s 2003 novel to the screen. It’s wisely written by Jane Anderson, as a longtime breakup marriage drama. Joan Castleman (Glenn Close) is the wife of the renown author Joe Castleman (Jonathan Pryce). He just won the Nobel Prize for literature in 1992. The couple and their downtrodden aspiring writer grown son David (Max Irons, Jeremy’s real-life son) go together to Stockholm to receive the prize. Their pregnant daughter (Alix Wilton Regan) remains home. While Joe is showered with praise, the long-suffering Joan remains in the shadows as she slowly gears up to take on her womanizing hubby in his man’s world. In a flashback to 1958 we catch up with the back story. Joan at that time is played by her real-life daughter Annie Starke. She is at Smith College taking a creative writing class taught by a young Joe (Harry Lloyd). Teacher and student have an affair, and he dumps his wife and kid to marry Joan. This scene was weaker than other parts because their romance never was convincing. Back to the present, where the narcissistic Joe tells the inquisitive media his wife is not a writer, and she’s shepherded with the other wives of Nobel Prize winners to go on a shopping tour. Meanwhile Joe responds to the flirty photographer (Karin Franz Korlof) assigned as his guide in Sweden. The film’s excellence rests on the magnificent Oscar-like performance of Glenn Close, playing the neglected wife not as a patsy but one who has her reasons for not breaking up the marriage–which is never verbalized but can be seen in her eyes. In Stockholm she is interviewed by a sleazy journalist (Christian Slater) who wants to write a tell-all bio of her famous novelist hubby with or without his permission, and he snidely tries but fails to get any dirt on him from her. The tale is told from her POV. She’s in a self-sacrificing marriage that’s sputtering under the pressure of dealing with her unfaithful and condescending hubby. He’s someone who cares more about his fame and winning the Nobel Prize than he does about the marriage or his family. What this ignored wife cares about will make you cheer her when she tells her hubby off in their final confrontation when home alone in their hotel room. 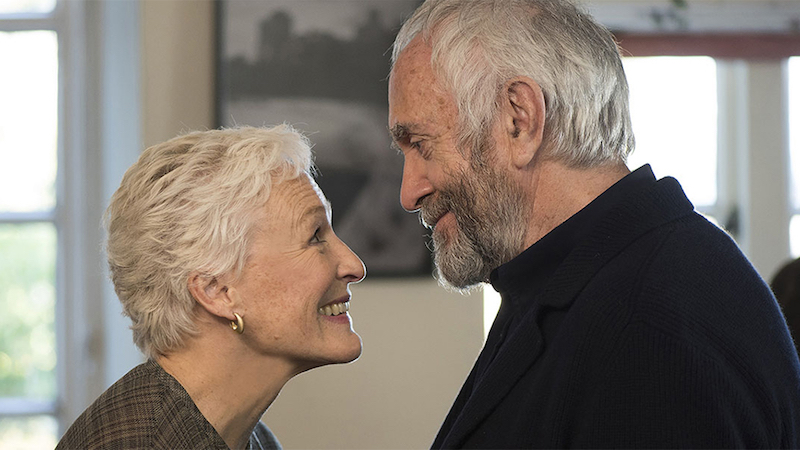