“Scathing scream of a black comedy that’s based on a play by Edward Albee.”

Auspicious directorial debut for Mike Nichols (“The Graduate”/”Catch-22″/”Carnal Knowledge”) in this scathing scream of a black comedy that’s based on the Tony Award-winning 1962 play by Edward Albee. It earned Nichols an Academy Award nomination for Best Director. The screenwriter and producer is Ernest Lehman. The film stars the tabloid’s favorite couple, Liz Taylor and Richard Burton, who star in roles as a feuding abusive couple who are not ashamed to raise their voices in anger in front of a younger couple. Back in its day, this adult drama let in the profanity and sexual implications more than any other previous Hollywood film as it kept intact most of the play’s strong sarcastic dialogue.

In an unnamed New England college town, at two in the morning, an unhappy childless middle-aged couple, the weakling alcoholic history professor, George (Richard Burton), and his bitchy spiteful wife Martha (Elizabeth Taylor), the daughter of the college president where hubby teaches, return home from a faculty party and the older couple have invited a younger couple over to their house for drinks. They are the self-proclaimed ladies’ man, the fledgling biology teacher Nick (George Segal), and his tipsy sniveling mousey wife Honey (Sandy Dennis), who lured hubby into marriage by falsely telling him she was pregnant and is now hysterically gun-shy about sex.

In the course of the long evening we are treated to Martha ripping into hubby by comparing his failings to her strong father in a mocking way, about their invented son that the couple pretends really exists, and Martha coming on sexually to Nick with an impotent George ignoring what he sees from the yard as he sees their shadows through the bedroom window. Finally George in a rage turns verbally on Martha and tells her their son is dead and conducts in Latin a mock burial, as Martha shows her vulnerable side that has been covered up by her vulgarity.

The intense permissive film, a step in the right direction for American dramas, was both a box-office smash and acclaimed by the critics. Taylor, 33 at the time, gives one of her few good performances in film playing a loathsome but pitiable character in her fifties, while Burton is captivating as the film’s force who is able to effectively deliver Albee’s heated verbal barrage that tells about a marriage that has survived for twenty years on a love-hate relationship. 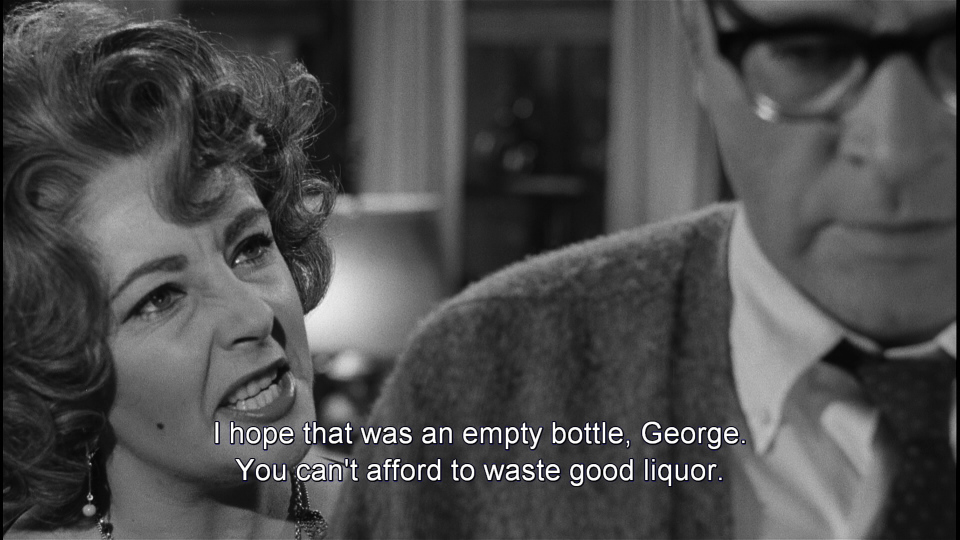