Has Taiwanese director Tsai gone to the well once too often with the same theme? Well, maybe and maybe not. He’s so darn good at showing the disenfranchised without a false ring to their pathos, that I don’t mind see him covering the same themes. I am still pleased with how fresh his work is and how he keeps shading his characters with their trademark single-mindedness struggle to survive despite everything being wrong with their life. Again he covers the same themes of alienation, loneliness, and lack of communication in the big city, but he seems to keep finding a new way of telling it. This time he adds Paris to his study of Taipei as he crosscuts between both cities and adds the themes of possible reincarnation and coping with bereavement. In this richly melodramatic work about family dysfunction and of maddening boredom and continual misery, there’s still hope in finding a new spark in life just by living through your dreams. It is in particular much like his The River and The Hole and Rebels of the Neon God, and is spiced with black humor, sight gags and existential philosophy. It shows his maturity as a filmmaker approaches the greats like Yasujiro Ozu, Robert Bresson, and Michelangelo Antonioni. For continuity, in all 5 of his films he keeps the same actors and has them stay in the same character.

The title refers to the young man Lee Kang-Sheng’s (Hsiao Kang) obsession with knowing what time it is in Paris. It could also be more metaphorical in meaning, as ‘there’ could stand for eternity not only a different time zone.

Lee’s exhausted father, who barely related with his son, has just died in the dinghy apartment and in a Buddhist ceremony is cremated. When Lee spots a cockroach in the kitchen, his mother (Lu Yi-Ching) berates him for giving it to his fat pet white carp for a snack, saying the priest told him not to kill any animal for the next 49 days because it could be his father’s reincarnation returning. Worst yet, mom now thinks the carp might have swallowed the spirit of her husband and starts conversing with the fish as she would her husband.

Selling cheap watches in his street stall above a downtown subway stop in busy Taipei, a young woman customer, Shiang-Chyi (Chen Shiang-Chyi), insists the only watch she wants is the one Lee’s wearing on his wrist because it can tell dual-time. At first reluctant to sell her that watch and then warning her it could bring bad luck because he’s in mourning, he finally yields when she returns the next day and tells him she’s leaving for Paris and must have the watch. She surprises him with a token gift of a cake. This touches him greatly, since the only friend he has is the pet carp fish and he is so out of contact with people that the tiniest warmth shown means so much. He can’t communicate with his parents, so he talks to the fish about everything that comes to his mind. Of course, he’s now further distraught that mom has interfered with his only friend and that she believes so readily in the superstitions of her religion, even if that crutch fails to give her the support she needs.

Lee’s casual contact with the girl heading for Paris becomes something he misreads, yet he makes it the new driving force of his life. He becomes obsessed with keeping the same time on his apartment’s clock with Paris, as he already begun his obsession by resetting all the watches in his suitcase display case and also by changing any public timepiece he can reach to Paris time. In an homage to Harold Lloyd, he changes the time on a huge outdoors bank clock. By going on Paris time at home, his nutty mom thinks that his father has returned and changed the clock because he wants her to keep those hours. As a result she serves him dinner at midnight, since there is a 7 hour difference with Paris time. Lee also seeks to rent some French videos to learn about Paris, as the pirate-vender in the stall recommends to the uninformed but aspiring Francophile Truffaut’s 1959 classic “The 400 Blows” and we see him enjoy watching at home the scene where a young Jean-Pierre Léaud is stealing a bottle of milk and gulping it down while running through the streets of Paris–a Paris from some 40-odd years ago that no longer exists (following Tsai’s ‘big theme’ that time changes everything, even if his characters can’t change).

Meantime, the non-French-speaking Shiang-Chyi is having a miserable and lonely time as a tourist in Paris. In one funny skit on a park bench at a cemetery, she meets the real Jean-Pierre Léaud. He plays an old randy eccentric who tries unsuccessfully to have a conversation with her and leaves her his phone number after they sit mute for awhile not able to communicate.

Sex is thought to be the way humans can best let go of their inhibitions and communicate with one another. Tsai exploits this myth, as all three featured loners have an unfulfilling sex experience. Lee a joyless one with a prostitute, Shiang-Chyi takes a chance and sleeps with a Hong Kong woman who is a visitor in Paris–but Shiang-Chyi’s advances are rebuffed, and the mother masturbates to the memory of her dead husband.

Tsai paints a broad picture of how locked into themselves his characters are that they can’t understand another person, not even to share in their joys or griefs, or communicate even the most basic things (Lee can’t even tell his mother that he changed the clock). It is through time that Tsai tries to measure the human condition, to see if that’s what keeps people on an equal footing. What does time exactly mean for Tsai? It probably means something tangible and continuous. He ends the film as the Ferris wheel by the Tuileries goes around in a circle. This is similar symbolically with the Buddhist karmic wheel of endless time and suffering being forever unless enlightenment occurs and one can get off this cyclical cycle. The final shot is framed by Tsai’s steady camera and propensity for long takes, allowing the viewer to freely observe the saddened Shiang-Chyi asleep on a park bench feeling guilty after her sexual fiasco while her trunk floats in a pond. It was tossed there by kids and is retrieved by a stranger (a stranger who curiously looks like Lee’s father). But getting rid of one’s excess baggage is a job to be done while awake and can’t be accomplished in a sleeping state, as Tsai gives no hints that the future will brighter for the three. Nor does he leave you with the impression things will stay the same. So Tsai is telling us that all three characters after some futile attempt to contact another and change their routine and experience some joy through sex, nevertheless they still find themselves more lonely and miserable than before. There’s no escape from either time or one’s self or Taipei, or for that matter–from the world. There’s also no getting away from Tsai being one of the great modern filmmakers, someone who keeps having fun playing with such mordant themes and creating films that are wise and deadpan humorous. 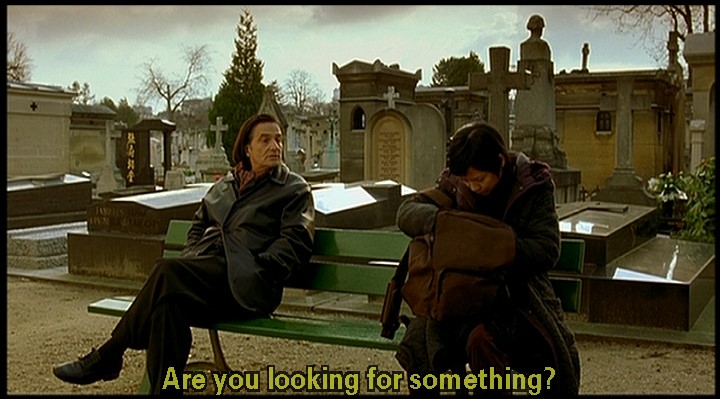