A wonderful modernized re-telling of the 1897 Henry James short story. It’s crisply written by Nancy Doyne and Carroll Cartwright and earnestly co-directed by regular collaborators Scott McGehee and David Siegel (“Uncertainty”/”The Bee Season”/”Suture”). The key player is Onata Aprile, who plays the precious neglected six-year-old Maisie. Though all the performances are excellent, it’s her sterling naturalistic performance that makes the psycho-drama work so effortlessly. The street savvy Maisie’s wealthy narcissistic self-absorbed busy career-orientated NYC townhouse residing unmarried parents, Brit asshole art dealer father Beale (Steve Coogan) and aging rock singer mom Susanna (Julianne Moore), are involved in a bitter custody fight and get shared custody of the child.The sweet perceptive child is tormented as both parents try to win her over with manipulative promises of real love but can’t keep their word, as they seem to always leave her in the lurch over some business thing that pops up.

One can’t help rooting for the resilient child, who absorbs in several touching scenes how she’s shuffled off to stay with mom’s new hubby, a charming nice guy bartender, one of her hangers-on, named Lincoln (Alexander Skarsgard), someone she married during an impulsive moment. Or she’s shuffled off to stay with her caring former nanny Margo (Joanna Vanderham), who ran away with the egotistical Beadle and married him. Lincoln and Margo eventually get together when abandoned by their spouses, and the strangers offer Maisie the real love she never gets from her warped parents. What comes through is the needless pain inflicted on such an adorable innocent, who only wants to be loved and to return that love.It’s all viewed through the eyes of the little girl, and serves as a heart piercing timeless tale about a dysfunctional family.Maisie allows us to see that she is perceptive enough to know the difference between pretend love and real affection–which clarifies the meaning of the title. 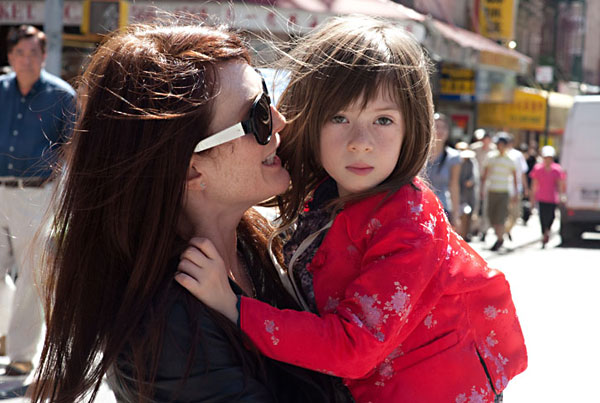